Adamawa State Government has assured that it will interface with the construction Company handling road project in Mubi town to provide adequate measure to check flooding.

Commissioner for Information and Strategy, Comrade Ahmad Ibrahim Sajoh,  stated this while in Mubi to assess the extend of damage done by flood following early rainfall of Thursday morning. He said reasons for flooding in the area have been identified. The Commissioner explained that enlightenment would be embarked upon to educate people on the dangers associated with building on waterways as well as removal of stump drainage earlier provided by the construction company to evacuate excess water.
He stressed that when flood occurred water from gutters and toilet, get mixed up with water from the well leading to outbreak and called for sensitization.

At the palace of Emir of Mubi, the Hon.  Commissioner highlighted dangers associated with the problem at hand and assured that Government is working with Partners including state Emergency Agency to brace up to anticipated challenge.

Comrade Sajoh said Government has equally recognised the vital role of the traditional institution for effective change as well as sensitization of the people and said parts of the state had experienced fair share of flood in recent times leading to death of three persons.

The Executive Secretary of  the State Emergency Management Agency, Alhaji Aminu Mohammed said response effort will include provision of food and non food items as well as drugs adding that prompt response by Government is to alleviate the suffering by those affected.

Responding Emir of Mubi, Alhaji Abubakar Isa Ahmadu pledged that the Emirates Council will support the current effort to intervene. He commended the gesture of the State Government and appealed for a more pragmatic steps to check re-occurrence of the ugly incidence.

A resident, Ibrahim Mai Kros, who spoke to Adamawa Daily Reports reporter  during the visit, blamed the flooding to diversion of water while providing drainage by Traicta Construction Company and appeal for corrective measure to be taken. 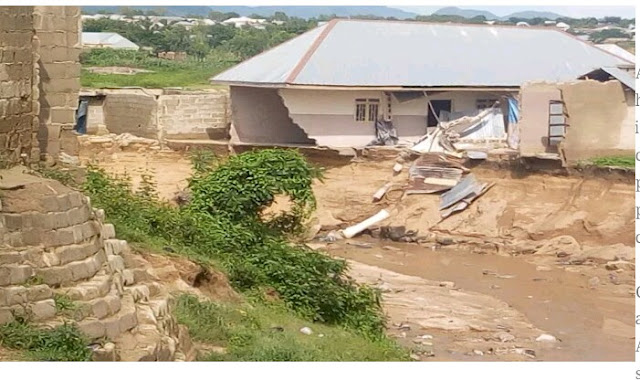