The State Executive Committee of the All Progressive Congress, APC in Adamawa State has adopted indirect method of Primary election for the selection of candidates vying on its platform.

The meeting, which was presided over by the State Chairman of the Party, Alhaji Ibrahim Bilal, was held at the Banquet Hall of the State Government House, Yola.

Governor Muhammad Umaru Jibrilla, who is thevleader of the Party in the State was represented by his Deputy Engr.Martins Babale. Babale said decision by Executive Members is for the overall interest of the party.

The Governor stressed that the decision is accepted to enable the Party in the State field candidates that will continue to work for people of the state.

Addressing Members at the end of the meeting, Alhaji Bilal commended them for unanimously adopting the indirect mode of Primary election for the state.

Secretary to Government of the Federation, Mr. Boss Kida Mustapha, who is also Member  Board of Trustee of the Party, said the constitution of the party allows member of the Executive Council to adopts any mode for its primary election. He however called for patience on the part of Members saying that the mode will enable the Party wax stronger in the coming general election.

Ahmed Ali Gulak, moved the motion for the adoption of indirect mode of primary election and was seconded by James Barka.

The meeting was rounded off with communique read by the Secretary of the party, Wafarni Theman. 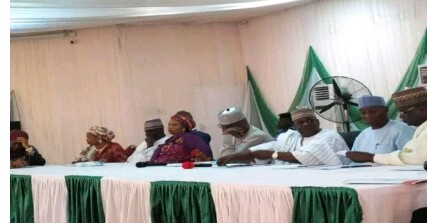