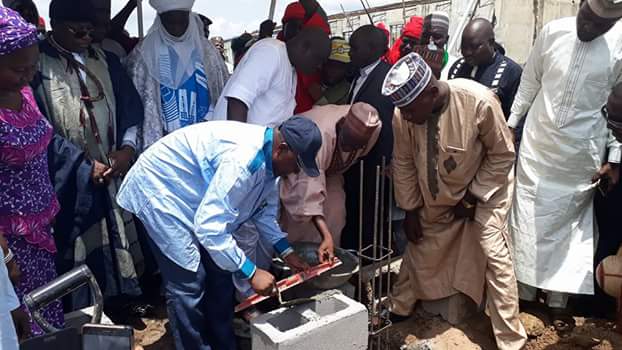 In an effort to remedy Seventeen Million Housing deficit in Nigeria, The Federal Mortgage Bank in collaboration with Federal Ministry of Works and Workers union has embarked on the construction of One Hundred Housing unit for Civil Servants in Adamawa state.

The Governor said that  the project is part of campaign promises of the All Progressive Congress to ease problems associated with housing for it's workers and described it as critical.

While challenging the contractor to finish work ahead of deadline, Governor Muhammad Jibrilla however  urged the people to support President Muhammadu Buhari in an efforts to provide succour to the electorates as all Roads infrastructure  in the state are ongoing and would be completed in a shortest period of time .

Managing Director of Federal Mortgage Bank of  Nigeria Alhaji Ahmed Musa Dangiwa who was  represented by the Director Projects,  Hajiya Rahimatu Aliyu revealed that about  One Point Six Billion Naira worth of Housing was earmarked  to Four Hundred and Ninety Three Beneficiaries in Adamawa State while Four Hundred and Seventy Eight Million Naira was refunded to retirees, pointing out that the  Bank will continue to refund  back to it's contributors when necessary.

Also in his remarks,The  Managing Director of the Developer Al Mukab Dynamics, Alhaji Muhktar Abdullahi stated that already work have commenced on all the One Hundred Houses and are at various stages of completion.

He further  said that the company will try to complete the project within Six months while streetlights, Roads and portable Drinking water will be provided , adding that the houses are in One, Two and Three Bedroom bungalows.

Governor Muhammad Umar Jibrilla was assisted in unveiling the project by the representative of Minister of Works and Speaker of the state house of Assembly.