The Adamawa State  All Progressives Congress APC  Gurbernatorial  candidate  Senator Muhammad Umar Jibrilla  Bindow  has assured  the  electorates of Adamawa State that  his administration will continue to provide dividends of Democracy at their  doorsteps.

Governor Muhammad Umar Jibrilla who made the assertion while  flagging off his electioneering campaigns at Toungo, Ganye, and Jada Local Government Areas on Tuesday  the 29th of January. 2019.
The Governor  reiterated his administration  commitment to give Education, Health and  Humanitarian development  sectors  the desired  needed  attention to the Adamawa  people  if voted into  power for the second term  in office.

He maintained that  Adamawa  electorates  deserves to be  commended  in view of the  support and cooperation being extended to his government at all times .

While  addressing the APC supporters  and loyalists, the  Director General of Bindow Campaign Organisation  Chief  Filex  Tangwami says with Governor Muhammad Umar Jibrilla  Bindow piloting the affairs of Adamawa State, real transformation will continue to  prevail in the state and is come to stay  with such Development and  assured that the  APC led government  will ensure that  electorates I'll enjoy the  dividends of Democracy.

He also commended President Muhammadu Buhari for his giant strides by reconstructing Mayo Belwa - Jada -Ganye  - Toungo Road  which was neglected  by the successive  government. 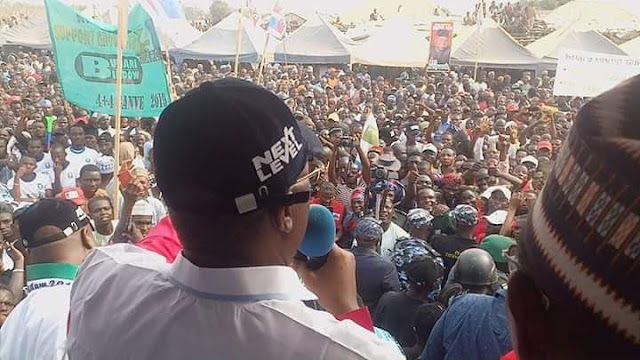 In their goodwill messages the APC  stakeholders in the area  which includes Alhaji  Mansoor  Toungo, Member  representing the  area at the  National  Assembly  Honourable  Abdul Razak  Namdas, and  the party Chairmen from the  area have assured the Governor of the Party's  victory during  forthcoming  general  election in the area.
The  All Progressives Congress  Governorship candidate had   also  paid a courtesy visit on Gangwari  Ganye  Alhaji Umaru  Adamu  Sanda, the  District Heads of  Toungo  and Jada at their palaces respectively where  the Royal  Fathers  had assured  the Governor of  their total support and cooperation  towards the  success of 2019 election in their domains.