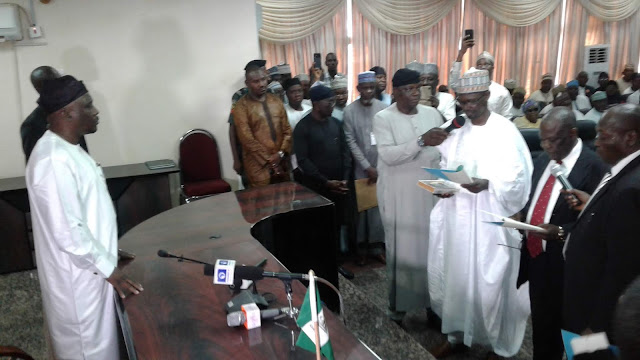 Governor Ahmadu Umaru Fintiri  said the cardinal principles of his administration is based on transparency and accountability.

The Governor was speaking while presiding over the swearing-in ceremony of Mallam  Bashir Ahmed as the Secretary to the Adamawa State Government  at the  Council Chambers of the Government House Yola, today.

Governor Ahmadu Umaru Fintiri urged the new  Secretary  to the State Government to abide by the Oath of Office taken while discharging  his  official responsibilities.

While congratulating  Mallam  Bashir Ahmed  over  his appointment, the Governor also said that  his appointment was based on merit and his track of records in service and advised him  to tolerate others in order to move the state forward. He also explained that his administration is  poised to provide the electorates with basic social amenities.

In his response, the  new  Secretary to the Adamawa State Government, Mallam Bashir Ahmed appreciated Governor  Ahmadu Umaru Fintiri for finding him worthy to serve as SSG and  promised to contribute his own quota to the progress and Development of the state.
He  assured that he will continue to  abide by the Oath of Office taken while discharging his official duties.

The  Oath of Office was administered by the State Chief Judge, Justice Ishaya Kida Banu and attended by family and friends of the new Secretary to the Adamawa State Government.
07:25
Adamawa Daily Reports
News
Email ThisBlogThis!Share to TwitterShare to Facebook