Speaking on behalf of the First Class Chiefs and the Emirs present, the Chairman Adamawa Traditional Council the Lamido Adamawa His Royal Highness Alh. Dr. Muhammadu Barkindo Aliyu Musdafa said they were at the palace to pay a traditional Sallah homage on Governor Fintiri.

The Chairman of the Council explained that the Sallah homage is a long tradition which was observed since the Colonial Era when traditional rulers paid Sallah homages to Provincial Residence.
He added that traditional rulers must align with the government in power so as to unite to help it recorded success in the course of implementation of its policies. This, the Royal father said will unite their subject to support the government of the day to bring development to their door step. 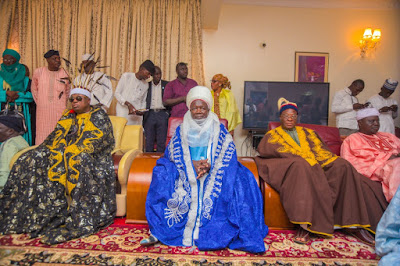 The Lamido Adamawa, Alh. Dr. Barkindo Aliyu Musdafa prayed for successful performance of hajj rites by Adamawa Pilgrims in Saudi Arabia and their safe return to the State. And, thanked Governor Ahmadu Umaru Fintiri for receiving the First Class Chiefs and Emirs and accepting their Sallah homage.

Responding, Governor Ahmadu Umaru Fintiri thanked God for a successful Eid-El Sallah celebration in the State and the First Class and Emirs for their traditional Sallah homage. Governor Fintiri said that what is needed from the Royal Fathers is their continue prayers so that his Government will succeed in delivering its mandate. He enjoined the Royal Fathers to take the fight against drug abuse to their domain. Stressing that the youths who are the leaders of tomorrow, if they engage in taking intoxicants will have their future been ruin. 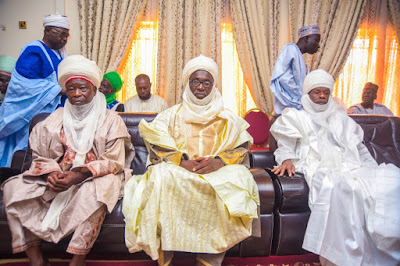 The Governor also call on the traditional rulers to cooperate with Government in fighting criminality in the State. Adding that the state has suffered from the menace of kidnapping, insurgency and armed robbery.

The Governor further assured that his administration will continue to give the education sector top priority as he applauded the Royal Fathers on the support they are according his administration.
Governor Ahmadu Umaru Fintiri thereafter sympathized with the First Class traditional rulers over the demise of their colleague, Kwandi Nunguraya over the week.