Home » press release » PRESS RELEASE;FCTA TO PARTNER WITH HIGH COURT ON ESTABLISHMENT OF CHILDREN AND YOUNG PERSONS’ COURT IN FCT

PRESS RELEASE;FCTA TO PARTNER WITH HIGH COURT ON ESTABLISHMENT OF CHILDREN AND YOUNG PERSONS’ COURT IN FCT 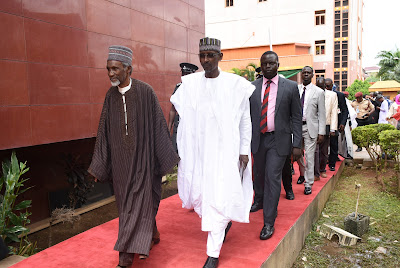 The Federal Capital Territory Administration (FCTA) has pledged
to partner with the FCT High Court for the establishment of a
Children and Young Persons’ court in the FCT.

Minister of the FCT, Malam Muhammad Musa Bello who made
the pledge  at the opening ceremony of the 2019/2020 legal
year of the FCT High Court, said the FCTA will support the courts
initiatives and innovations designed to ensure that an efficient
justice dispensation system is entrenched in the FCT.

Malam Bello also pledged support for the High Court in its desire
to make Abuja the Centre of Arbitration for local and international
contracts. He said the move would be beneficial to the FCT
considering the volume and importance of the transactions that
occur in the nation’s capital.

The Minister commended the FCT judiciary for the innovations
brought to FCT court system and processes, especially the
Alternative Dispute Resolution (ADR) option which, he said,
has helped in settling many land and property disputes
which usually proved to be expensive and time wasting at
litigation.

In his words: “The Alternative Dispute Resolution approach to
resolving matters, which you have often advocated, has helped
in settling many disputes in the FCT, especially land and property
disagreements which have often proven to be costly and time
wasting had they gone to litigation.
“The innovations you have brought to the FCT court system
and processes have encouraged many litigants to choose
to have their cases heard in the FCT courts when such
matters are sometimes outside your jurisdiction. This clearly
demonstrates the level of confidence the general public has
in our court processes here in the FCT”.

The Minister also used the occasion to assure residents and
visitors of the FCT of the determination of the FCT Administration
to keep the territory safe, free of criminalities, while stressing
that random acts of criminality will not be allowed to define
the FCT.

In his remarks, the Chief Judge of the FCT High Court, Justice
Ishaq Usman Bello, urged lawyers to cultivate the habit of doing
pro bono work of providing legal services to those who cannot
afford to pay the fees. He said lawyers who engage in pro
bono services will be rewarded as he had already introduced
a merit award for lawyers who engage in such selfless services in
the FCT.

The Chief Judge also assured all residents and visitors of the FCT
that all case determinations will be according to merits and
supported by the law, adding that no political, social, economic
and other consideration will influence the outcome of any case.