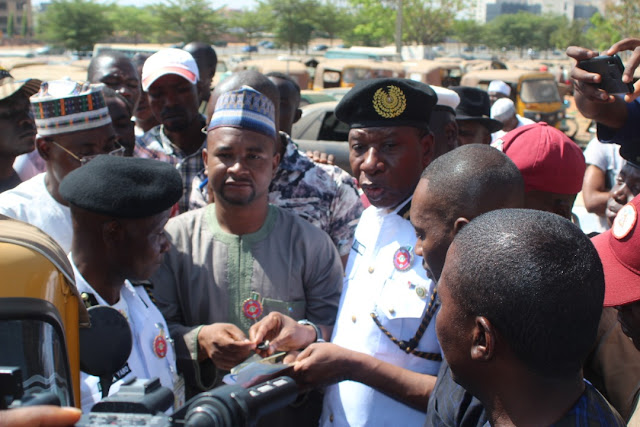 As a gesture of goodwill as well as in appreciation for compliance to the rule of law by commercial tricycle operators, the Honourable Minister, Federal Capital Territory (FCT) Malam Muhammad Musa Bello, has directed the release of 136 impounded tricycles to their owners.
In a symbolic ceremony at the FCT Department of Road Transport Services (DRTS) office in Mabushi, various unions of the tricycle operators gathered to receive the tricycles on behalf of their members.
Addressing the gathering on behalf of the FCT Minister, the resource person on traffic management in the FCT, Alhaji Ahmed Sajoh, said the administration recognizes the peaceful conduct of the operators in its efforts to ensure a safe and efficient traffic management system in the FCT, hence the return of the tricycles as a sign of goodwill.
Alhaji Sajoh however, explained that although the release was unconditional, the FCTA expects that all concerned will abide by laid down rules and regulations or face the full wrath of the law.
He said: “Let me say this for the benefit of everybody here…violation of traffic rules is still an offence and can attract sanctions by security agencies. This gesture by the Honourable Minister does not mean it’s a free for all situation and people can continue to violate traffic regulations. It is the responsibility of the security agencies, the DRTS, Road safety, the Police and Department of State Services, to make sure that traffic rules are obeyed in the FCT”.
He added that sensitization has been going on with a lot of interfacing between the FCTA and the various unions and operators with a view to ensure that all parties were on the same page on the issue of traffic management.
Sajoh expressed the hope that the unions and the operators will take the Minister’s magnanimity as an incentive to continue to cooperate with the Administration and behave well on the roads.
Speaking at the event, the Director, Department of Road Traffic Services, Alh. Wadata Boringa, said the gesture by the Honourable Minister would sustain the cooperation security operatives were getting from the unions and the riders in enforcing the restriction of movement of the tricycles.
He called on representatives of the tricycle owners and riders to take the message of the Minister’s kind gesture to all their members while impressing on them that an abuse of the gesture will not augur well for them, stressing that any tricycle operator caught violating the restriction order will be dealt with accordingly.
Mr. Boringa also stated that his agency would continue to arrest erring road users, be it tricycles, commercial motorcycles, rickety vehicles and unpainted taxis, advising them to the leave the Federal Capital City (FCC) on their own accord to avoid arrest as the exercise is going to be continuous with the possibility of an increase in tempo to achieve result.
Also speaking, representative of the Director, Department of Security Services, Mr. Peter Olumuji, observed that most tricycles used to perpetrate crime were not registered with the union. He therefore advised the union to register all riders, ensure their biodata is captured and have a side code on their tricycle to indicate the area where they are allowed to operate.
He said: “Any Tricycle operator without the side code and not captured properly will be apprehended henceforth. This is one of the security measures taken by the FCTA to ensure that the FCT is secured at all times”.
Responding to the gesture by the Honourable Minister, a representative of the tricycle operators Unions, Comrade Musa Ibrahim Anchau expressed his gratitude and commended the Minister for the unconditional release of the 136 tricycles.
He prayed that the almighty continue to guide the Minister and his team while assuring the FCTA that their members will continue to be educated on the need to obey all rules and regulations.
ANTHONY OGUNLEYE
CHIEF PRESS SECRETARY
26/12/2019
FCTA/OCPS/PR/086
05:56
adamawadailyreport@gmail.com
press release
Email ThisBlogThis!Share to TwitterShare to Facebook