Home » Special Report » SPECIAL REPORT:The Need for Religious and Traditional Leaders to Preach and Enlighten parents against Early Marriage among Teenagers cannot be over Emphasized.

SPECIAL REPORT:The Need for Religious and Traditional Leaders to Preach and Enlighten parents against Early Marriage among Teenagers cannot be over Emphasized. 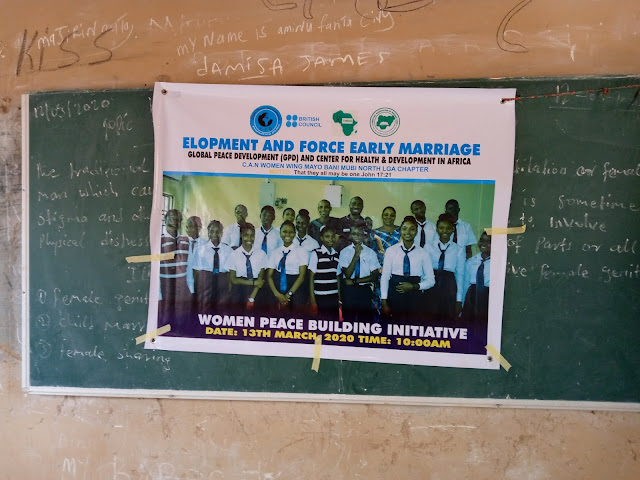 The  Chairperson of Christian Association of Nigeria Women Wing Mayo Bani in Mubi North, Mrs Gladys Jacob  made the call during a sensitization programme for Secondary School Students of her community on elopement and forced early marriage held at Government Senior Secondary School Mayo Bani.

Represented by the Secretary of the Association, Mrs  Briskila Joel, explained that they organised the event to sensitize parents and school children on the effects of Early marriage pointing out that Mayo Bani is among communities that suffered cases of Early marriage but with such programme it has reduced to the bearest minimum. 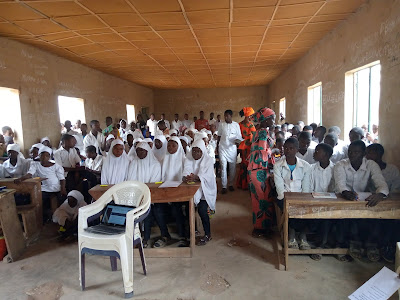 Mrs Gladys Jacob thanked the Non Governmental Organization. Global Peace Development and Center for Health Development in Africa for their support in actualising the programme and appeal to the participants to make good use of the knowledge acquired.

Mrs Janet John who is the facilitator at the programme spoke on the effects and consequences of Early marriage describing poverty and lack of education as some of the causes of Elopement and force Early marriage and appealed to parents in Mayo bani to desist from giving out their children below the age of eighteen years.

Also in his remark,a teacher of Government Senior Secondary School Mayo Bani Mallam  Umar Abubakar thanked CAN Women Wing of Mayo Bani for coming up with this intiatives describing it as timely.

He said with this sensitization programme many parents in their areas will understand the effects of giving out their children to marriage and send them to school in other to become better citizens.

Emmanuella pigami and Kevin John both students of SS two expressed delight with the knowledge they have acquired promise to educate their friends on dangers associated with Early marriage and calls for concerted effort.