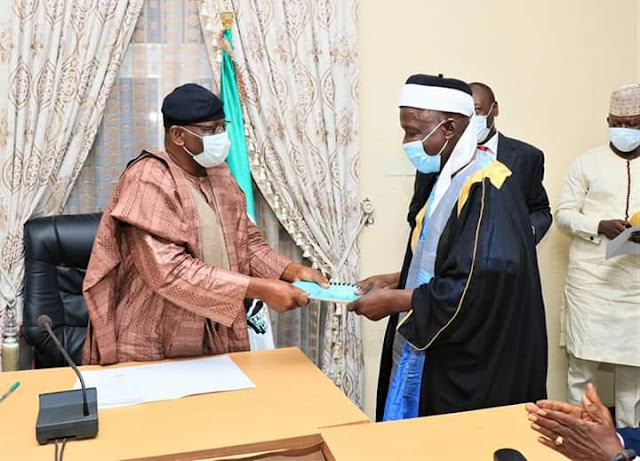 Following the retirement of Mohammed Alkali the grand Khadi Sharia  court of appeal,  Governor Ahmadu Umaru Finitiri  has sworn Musa Hassan Bazza as Acting grand khadi   with a call on him to discharge his duties based on the Constitution of the State.

Governor Finitiri who was represented by his Deputy Chief Crowther Seth said that, contributions of the outgone grand Khadi will never be in vain, while call on the newly Acting grand khadi to emulate his footstep by doing the needful for the overall development of the State.

Chief Seth made this known Wednesday during the swearing in of the Ag. Grand  Khadi at the Deputy Governor's office in Yola, Adamawa state.

He also reiterated that Governor Ahmadu Umaru Fintiri is ready to be law abiding and must always obey the rule of the law, Adding that the state government has since create sanity in the judiciary.

Governor Finitiri called on the people of the State to adhere strictly to the guidelines of COVID. 19 rules in order to curb the spread of the pandemic in the state and the nation at large.

He promised to abide by the the rule of law and appreciated the members of Judiciary Service Commission
for their moral support.

The Oath of alligence and Oath of Judiciary was administered by the Chief Judge of the State, Justice Ishaya Banu .