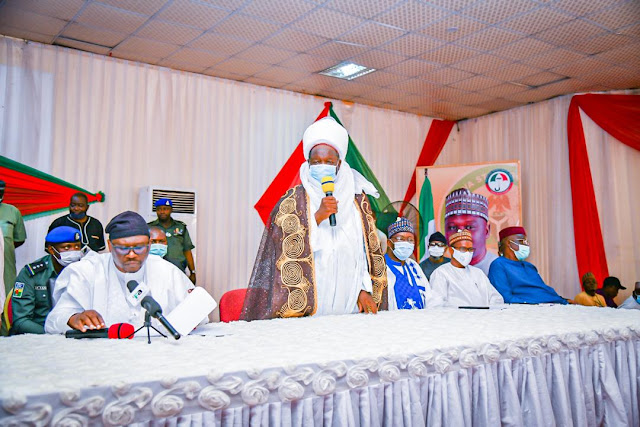 Governor Ahmadu Umaru Fintiri has charged people of Ganye Chiefdom to help in the fight against kidnappers who are tormenting the chiefdom.

The Governor stated this while receiving people of Ganye Chiefdom Tuesday on a thank-you visit at the Banquet Hall in Government House Yola.

Governor Fintiri said kidnapping which has become rampant in Ganye Chiefdom need a collaborated effort of all and sundry to bring to an end the activities of the perpetrators. Urging especially the youth to give their maximum support.

He assured his administration tireless effort to get rid of all forms of criminalities in the State with his new security architecture.

While assuring of more dividends of democracy to the people of the Chiefdom, Governor Fintiri said political appointment in to his led administration was  base on merit, without regard to party affiliation.

The Governor explained that the decision to appoint competent Adamawa indigenes across PDP in his administration was with the consent and advise of the State leadership of the Peoples Democratic Party especially the chairman, Barrister A. T. Shehu.

Governor Fintiri thanked the people for voting him into office and assure not to disappoint them.

Speaking earlier, the leader of the delegation, Gangwari Ganye, HRH Alh. Dr. Umaru Adamu Sanda said they were in Government House on behalf of the people of Ganye Chiefdom that comprises of Toungo, Ganye and Jada LGAs to thank Governor Umaru Fintri for appointing their sons and daughters in his administration.

The royal father recall the outstanding achievements recorded by Governor Fintiri when he was the acting Governor for three months in 2014. He stated that the people of Ganye Chiefdom benefited in physical infrastructure among them was the upgrading of Cottage Hospital Jada to General Hospital.


He thanked Governor Fintri for completing projects initiated by the past administration which include Ganye township road and connecting Toungo LGA to national grid, noting the later project reached advance stage of completion.

Gangwari Ganye assured Ganye Chiefdom support for Governor Fintiri led administration, stating that the Chiefdom has benefited in his appointment in 2014 by appointing their son Prof. Abdullahi Liman Tukur as SSG and in his present administration Prof. Maxwell Gidado, SAN as Chief of Staff.
The Royal Father said presently there are over seventy sons and daughters of Ganye Chiefdom appointed by Governor Ahmadu Umaru Fintiri in his administration.