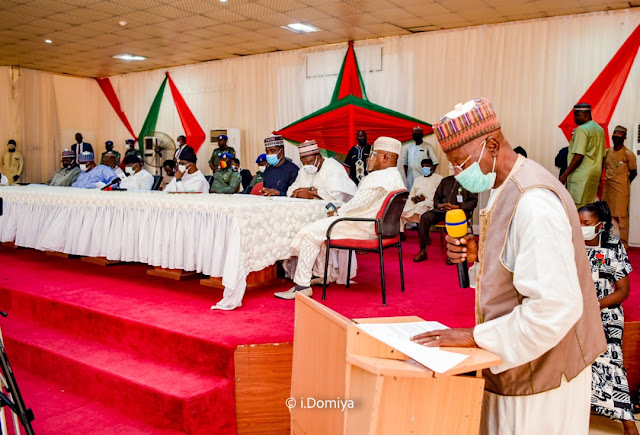 
The Adamawa State Governor, Rt. Hon. Ahmadu Umaru Fintiri has call on the people of Michika to remain united in order enjoy the dividends of democracy which his administration is proffering.


The number one citizen of the state said Michika people deserve to have their fair share in his administration like other Adamawa Communities having them voted massively in the last poll.


Receiving Michika Community in a thank-you visit at the Banquet Hall, Government House Yola Governor Fintiri said he will continue to reach the people like other part of the state through developmental project and especially in the area of security having Michika is among the LGAs that suffers most from the dreaded Boko Haram insurgents.


While stressing the need for the people to remain united, Governor Fintiri said no one influence him to appoint his political office holders from Michika. He explained that not all people will be appointed into political office because of the limited political office the political atmosphere of the State provided.


He however assured that people will continue to enjoy the dividends of democracy his administration came with and when the need to appoint more people into political office, he will consider it.


Governor Fintiri assured working with the appointees to bring developmental projects in the State maintaining that this can be achieved through unity and support of the entire people of the State.


The spokesman of Michika community, the former Deputy Governor of the defunct Gongola State, Chief Barrister David Barau said they were in Government House Yola to appreciate Governor Ahmadu Umaru Fintiri for appointing their sons and daughters in his Government.


He apologised on behalf of their sons and daughters who turndown appointment given to them by Governor Ahmadu Umaru Fintiri administration stating that Michika community regretted their act for not utilising the opportunity given to them to serve Adamawa State.