By Barnabas Augustine
04 /8/2020
Governor Ahmadu Umaru Fintiri of Adamawa State has flagged off construction of first ever grade interchange roads in North-East Nigeria, flyover bridge and other road projects in the state capital.
Other roads the Governor flagged off in the state capital include Weekly Scope road and Government House Road.
While flagging of the construction work Tuesday at the venue of the event, Capital junction  in Jimeta in the State capital, Governor Fintiri said the event marks a major milestone of his administration commitment to vigorously undertaking an urban renewal that will give the state capital and towns a befitting model to showcase.
The Governor maintain that in fulfilment of this obligation, his administration has already embark on road construction in some towns to include township roads in Michika and Madagali while the provision of Roads and Health infrastructure in Yola South, Numan, Fufore and other Local Government Areas will follow suit.
Simultaneously, he said other roads are constructed in the state capital.
"in addition to the construction of these Flyovers and Underpass, which are the flagship of our Urban Renewal/Development Agenda, work will continue on Weekly Scope Road, among other Township Roads already earmarked for construction" Governor Fintiri said.
The anticipated expanding population in the state capital informed the construction of the flyover and Grade Interchange.
"Apart from the aesthetics, the construction of the Flyovers and Grade Interchange, in the Heart of Jimeta is in anticipation of the capital’s ever expanding population and the attendant explosion in Urban traffic", Governor Fintiri stated.
Governor Fintiri assures his led administration total commitment to delivering of these projects, stressing he will not concede any inch to failure while stating the assurance given to him by Messrs Triacta, a company which he said has established a reputation for working internationally at delivering deadlines on projects, to complete it within time frame.
Emphatically, Governor Fintiri said the supervising Ministry has also demonstrated an uncommon commitment and readiness to ensure that these projects are delivered on time.
Governor Ahmadu Umaru Fintiri appeal for understanding among residents of the State capital who will have to bear with the discomfort and disruption to traffic flow while construction is going on. Adding,  that "these are inconveniences we have to endure as the Government commences its Urban Renewal Agenda".
Earlier, the commissioner Ministry of Works and Energy Development, Alh. Adamu Atiku lauds Governor Fintiri for embarking on urban renewal and development agenda that will transform the state capital and other towns in the state.
The commissioner revealed that the contract for the construction of of the Grade interchange which was awarded to Triacta Nigeria Limited will cost "five billion,  eighty-nine million, five hundred and eighty thousand, eighty-seven naira, sixty Kobe (N5, 089,580,087.69)".
He explained that the scope of the work includes and underpass linking Galadima Aminu Way,  Justice Bubs Ardo Road and an overhead bridge linking Atiku Abubakar Road and Lamido Aliyu Musdafa Road.
He said, a ground level overpass and a roundabout will also be provided to distribute traffic to all roads. He further explained that extra lanes will be provided on roads on each side at the ground level with storm water drains from Justice Bubs Ardo Road into the Police Headquarters.
While for the construction of the flyover at the Total Filling Station, the commissioner said the scope of the work will include "Provision of roundabout to distribute traffic to all roads at the ground  level, provision of extra lanes on the road on each side of the roads on the ground level".
Revealing that it will cost "Three billion, forty-three million, eight hundred and fifty-three thousand,  four hundred and sixty-nine naira, fifty-six Kobe (N3,043,853,469.56).
Alh. Adamu Atiku assured that his ministry will supervise the work to ensure quality work while stating that the projects are bequeathed to generations yet to be born.
The Managing Director MSSR Triacta Nigeria Limited, Elie Abu Farahat has assured the state quality and meeting the timeframe of the contract.
The MD said that they have achieved similar project in Kano State and by the time they hand over the project at the end of 2021, the state will be proud of Triacta Nigeria Limited. 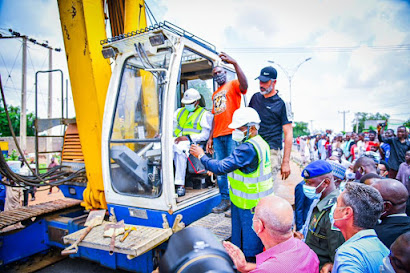