NEWS:A GROUP FROM SAMINAKA IN YOLA SOUTH CALLS FOR HELP. 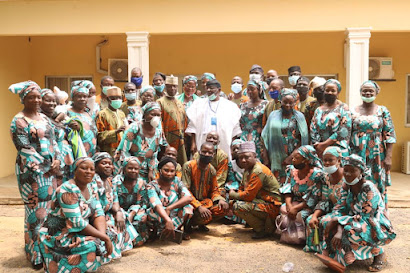 The people of Saminaka, Yola South from Numan Federation has appeal to the present administration to come to their aid in road construction to ease their hardships in the Area.

The leaders of the delegation, Mr Gadiel Nikanus and Dories Emmanuel in their seprate remarks during aa Courtes call to the Deputy Governor, Crowther Seth condoled him over the demise of late Hama Bachama, Humon Stephen Irimiya describing death as inevitable on every soul.

On the other hand, they Congratulated the emergence of Dr Daniel Shaga as the new ruler of Bachama Chiefdom while urging him to built on the good legacies of the late  predecessor.

They lauded Govenor Fintiri for the gaint stride in road construction, payment of salaries in good time, fighting insurgency and rehabilitation in the State, promise to support his regime for more development.

The Deputy Governor, Chief Crowther Seth appreciated their coming and promise to look into their plight. He causion residents not to build on water ways and follow government land allocation plans.

Chief Seth who said the government of Govenor Fintiri will not live no stone unturn in ensuring that  it provide more democracy devidents .