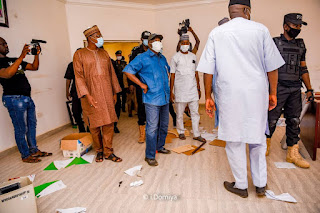 He call on those politicising the loot for peace, saying as far as he is concern he has not offended any body and if he does, for any of his action or inaction he apologise for the interest of the state.

At the places inspected, the looters looted all food items stored in warehouses, office equipment, drugs supplied for hospitals in the state, electronics, stationaries, official documents, furniture, farm machineries and implements, destroyed public buildings, catered away all aluminum  roof among numerous others.

Responding to questions from news men after assessing the level of damages caused by looters on the properties, Governor Ahmadu Umaru Fintiri said he will meet with his cabinet and service Commanders to evaluate the situation for the best interest of the citizens.

He called on the citizens to be calm as Government is doing its best to restore law and order while calling them to desist from repeating the act, describing it as a fight against the common wealth and future of all the state citizens.

The Governor explained that the looting in the state if it has been allowed to continue will affect even the free education his administration is given to the masses; the palliative given to the patients at hospital will be defeated; and the citizens will go back to the age they are suffering.

He said his administration is has embark on many projects for the economy recovery of the State. He enjoined all Adamawa citizens to support the laudable projects which is for the best interest of the State.

He frowned at the looters who he said they copied the act from other places and implement it in Adamawa wrongly, without knowing the repercussion. Adding that they went beyond looting food items to public and private properties and equipment.

He applauded the security agencies in the State for sustaining their effort, leading to recovery of some of the looted properties and apologise to the law abiding citizens who the curfew he imposed affected.

Governor Ahmadu Umaru Fintiri said those who are encouraging looters for political reason especially on social media, when the looting became unbearable resorted to calling on security agencies to deploy their men to their houses and business places of their interest. He stressed that the looting is beyond politics.