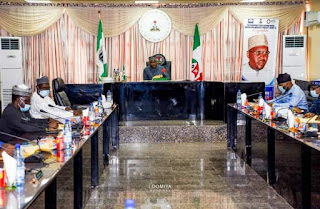 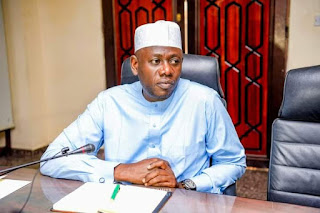 Briefing news men after the council meeting that was presided by Governor Ahmadu Umaru Fintri,  the Honourable Commissioner Ministry of Information and Strategy, Dr. Umar Garba Pella said the Council has deliberated on the current infrastructure situation of the State and the need to increase the budgetary allocation to the State Ministry of Works and Energy Development.
He said the initial budget of the Ministry for its Capital Expenditure was Twelve Billion, Six Hundred and Twenty Seven Million, Thirty Nine Thousand Five Hundred and Twenty Six Naira.
He explained that COVID-19 pandemic which affects the economy has necessitated the review of the Ministry allocation to ten billion, six hundred and ten million naira. Adding that due to the commitment of the present administration to provide infrastructure to its citizens, Adamawa EXCO in one of its sitting approved construction of two flyovers in the state capital and flagged off construction of various road projects across the State.
Dr. Pella stated that the 2020 capital expenditure for Ministry of Works and Capital Development was about six billion naira, which is minimal due to the speed of work the contractors are embarking on the two flyovers and other roads in the State, and by the end of the year the contractors will demand additional money.
He said the Council has approved additional Two Billion  Naira for the supervisory Ministry so that it will meet its obligation with the contractors.
Dr. Umar Garba Pella said, Ministry of Works and Energy Development has been directed to write to the State House of Assembly for onward deliberation and approval of the upward Review Capital Expenditure of the Ministry.
12:12
Adamawa Daily Reports
Email ThisBlogThis!Share to TwitterShare to Facebook