Home » » Unlabelled » NEWS:Gov Fintiri Insists on Due Process for Appointment of Prospective Perm. Secs. as he Appoints 11 today.

NEWS:Gov Fintiri Insists on Due Process for Appointment of Prospective Perm. Secs. as he Appoints 11 today. 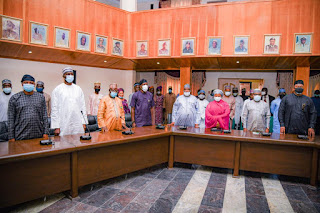 Adamawa State Governor Rt. Hon. Ahmadu Umaru Fintiri insisted that prospective candidates for appointment for the rank of Permanent Secretaries in the state Civil Service must possess all the prerequisite set by law for appointment. 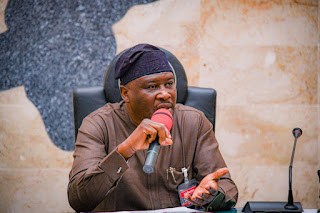 Governor Fintiri disclosed this, Monday while addressing forty-five out of fourty-six prospective Permanent Secretaries who sat for examinations, out of which he appointed eleven for the available vacancies.

The Governor revealed that together with his cabinet, they have undertaken not to interfere with Civil Service in Adamawa since assuming the number seat of the State, with the intention of making reform so as to make the service the best in the country.

“The best way is to subject the process to a diligent examinations. Even though sometimes the best doesn’t emerge through examination; but all the same that is the only way we fill, if we are removing all the vices that has characterise selection of Permanent Secretaries in the past”, Governor Fintiri said.

He stated that at the on set, the examinations were conducted internally through some selected former Head of Service and Permanent Secretaries. Stressing that to make the process more transparent, his Government involve external examiners, Administrative Staff College of Nigeria who are known for training Civil Servants and conducting examinations.

While congratulating the Permanent Secretaries he charged them to be loyal, diligent and hardworking. And, desist from dragging politicians into Civil Service.

The Governor emphasised that those that will be appointed must not have less than six months remain in the service.

Earlier in his remark, the Head of Service of the State, Dr. Edga Amos Sunday said henceforth those to be appointed as Permanent Secretaries in the State must pass a qualifying examinations.

He said, candidates who will sat for the examinations must come from Local Government that has vacancy in order to avoid lopsided appointment and must be the most senior Civil Servant from the LG that has vacancy so as to avoid a situation where juniors are appointed ahead of seniors among others.

The Head of Service noted that the reforms initiated by Governor Fintiri led administration has come up with the best Permanent Secretaries in the State. Stating that it has eliminated nepotism, favouratism and sentiments.

Dr. Edgar maintained that the reform has enhance performance, productivity, efficiency and effectiveness of the service. And, It has also encourage hardworking so that Civil Servants who continue alone the trajectory will one day become Permanent Secretaries.