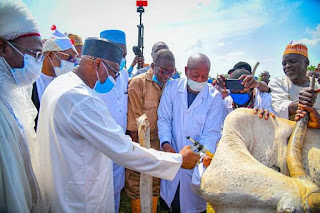 By Barnabas Augustine
24/10/2020
Governor of Adamawa State, Rt. Hon. Ahmadu Umaru Fintiri has reintroduced annual vaccination campaign against livestock diseases in the State.
Governor Fintiri launched and flagged off the campaign for the year 2020/2021, Saturday, at the Girei International Cattle Market; ten years after it was Government conducted it in the State.
The Governor noted the vast land and enormous livestock resources Adamawa has, but various diseases have been a hindrance to full exploitation of the huge potentials of the livestock subsector to boost the economy of the State.
Maintaining that livestock health is an integral path of human health since a major part of human sustenance is connected to the food consumed.
He said, contagious Bovine Pleuvoneumonia CBPP has been having a devastating effect on livestock, depleting their population over the years particularly within the period that the animals have not been vaccinated.
Governor Fintiri said his administration through the State Ministry of Livestock and Aquaculture Development is making effort to control some of these diseases, so that pastoralists will have a healthy, diseases-free livestock that could provide healthy meat for the teaming population of the State.
He called on the LGAs Chairmen in the State to key into the laudable exercise while enjoying farmers and herders to avoid any form of confrontation especially during this harvest season.
In his remark, the Honourable Commissioner Ministry of Livestock and Aquaculture Development, Samaila Yayaji Iyajo applauded Governor Ahmadu Umaru Fintiri for introducing a new security architecture that has ended farmers/herders clashes as well as kidnapping in Girei LG and the State at large, allowing farmers and herders to live harmoniously.
He thanked Governor Fintiri for reintroducing the annual vaccination campaign across the 21 Adamawa LGs, which the pastoralists were yearning for while calling on the pastoralists to use the opportunity to vaccinate their livestock to prevent them from contacting, spread and transmission of diseases from animals to humans especially during this COVID-19 period.
Also in his remark, the Permanent secretary Ministry of Livestock and Aquaculture Development, Dr. Abdulraman Tukur said that livestock sector contributes 37 percent Adamawa GDP, higher than any sector of the state economy, saying investment into the sector will improve the livelihood of the citizens.
He said due to population growth leading to competition in acquiring of land, farmer/herder clash,  cattle rustling, banditry, kidnapping, communal clashes, insurgency and other criminalities has led to the influx of cattle from other State, becoming some of the challenges of the development of livestock sector in the state.
09:49
Adamawa Daily Reports
Email ThisBlogThis!Share to TwitterShare to Facebook