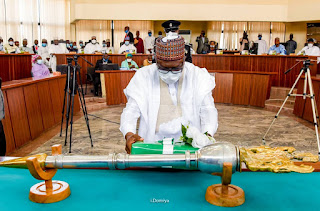 Governor Ahmadu Umaru Fintiri has presented over one hundred and forty billion naira appropriation bill to Adamawa State House of Assembly for consideration.

Education, according to Governor will continue to be among his administration priority having Education Sector have multiplier effect on other sectors. He maintained free education, feeding and SSCE examination will be sustained to the end of his administration this will be complemented with recruitment of 2,000 qualified teachers to boost the sector among other developmental project in the sector.

Governor Fintiri explained in 2020, the State Government budgeted over 97.4 billion naira for capital expenditure and was later revised to over 76.6 billion naira. Adding only 14.7 billion naira was expended as at 30th September 2020 on priority projects and programmes in Works, Education, Health, Agriculture, General Administration among others.

He said the low performance in terms of capital projects in the 2020 approved budget was as a result of dwindling revenue inflow from the federation account due to COVID-19 pandemic.

He assured by next week, the House will commenced sitting for the defence of the budget by the relevant Government MDAs.