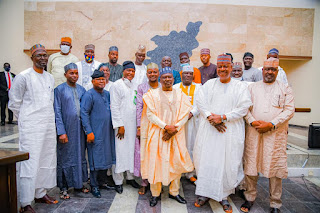 Governor Ahmadu Umaru Fintiri has charged Local Government Chairmen in Adamawa State to take charge of their  Local Government Areas and be in total control; meet with traditional leaders, security agencies and religious leaders to impact positively on the youths so that they can be better leaders of tomorrow.

The Governor made the charge, Monday at Government House Yola while receiving 21 Local Government Chairmen in Adamawa on a solidarity visit over the recent loot in the State.

Governor Fintiri noted that the activities of #EndSARS has degenerated and hijacked by hoodlums, causing damages on properties worth billions of naira. Maintaining, it has taken Adamawa backward, but express optimism that his administration will overcome it.

The Governor, enjoined the people of the state to embrace the looters so that they can be reformed while making them to regret their action and inaction. He added that the youths are the citizens of the state and their reformation will be for the good of the State.

Governor Fintiri assured that in 2021, his administration will give adequate priority to youth empowerment programme in Adamawa so as to make the youths responsible, become self sufficient while guaranteeing their future.

He thanked the Local Government Chairmen for standing firm for the common interest and wealth of the State. Lauding them for standing steadfast in ensuring that the activities of the looters did not spread in the various Local Government Areas. Describing the loot as “regrettable and condemnable”.

He equally thanked traditional leaders, religious leaders and stakeholders in the state for standing to condemn the destruction on public and private properties in the State.

Earlier in his remark, the leader of the delegation, Hon. Jingi Rufai who is the ALGON Chairman and Chairman Mubi South Local Government Council, said they were in Government House Yola to pay a solidarity visit on Governor Ahmadu Umaru Fintiri over the recent loots on public and private properties in Adamawa.

He said that the looters’ activities in the State was politically motivated as sponsored by the enemies of the State who do not wish Governor Fintiri’s administration and the good people of the State well.

While assuring Governor Fintiri Local Government Chairmen unflinching support with their people at the grassroots, Hon. Rufai salutes the Governor for his courage and determination in handling the crisis.

He encouraged the Governor not to deter from the activities of the enemies of the State who he described as people who wants Adamawa State to be backward. He said the good people of the State are always behind him and praying God to give the Governor more wisdom to pilot the State.