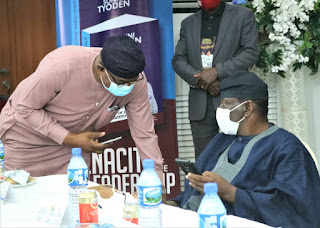 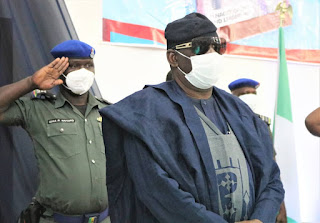 By: Yusuf Umar
Chief Crowther Seth joined his counterparts among other top Government officials and traditional rulers from far and near  at the Plateau State Government House on Saturday for the book launch published by the Plateau State Deputy, Governor Sonni Tyoden tagged "Tenacity of life and leadership", and to also celebrate him and his wife at seventy and sixty years of age.
The publication consists of three hundred and fifty six pages and thirty four Chapters Chronicles the experiences of the Plateau State Deputy Governor from academia to his political or leadership qualities.
The Deputy Governor of Benue State, Engr. Benson Abounu lauded the publisher Professor Sonni Tyoden on behalf of other Deputy Governors describing the event as historic. He said the day calls for the celebration of a man of honour and a dintinguished schorlar per excellence. He further described the celebrant as an upright and courageous person who always finds solution to problems, hence the idea for the publication to inculcate the tenacity of life in young ones.
The book reviewer professor Olugbemiro Jegede also emphasized that the book "Tenacity of life and leadership" is well reviewed and documented, noting that it started with searching for home and ended with the dynamics of political inclusiveness.
The Plateau State Governor represented by the secretary to the state government Professor Danladi Atu commended the deputy Governor, saying his hand work has done the people of the state proud.
He lauded his humility, urging him to continue injecting his wealth of experience to move plateau to a greater height.
For him, the publication is to bridge the gap between theory and practicals, even as he advocates for the introduction of tenacity of life in the schools curriculum for the benefit of the young ones.
The publisher who is the deputy Governor of plateau state Professor Sonni Tyoden appreciated those who contributed in one way or the other, maintaining that without them such historic event could not have been possible.
Other dignitaries at the occasion include; the deputy speaker house of representative, representative of Chief of army staff, traditional rulers among other top government officials and politicians.
16:39
Adamawa Daily Reports
Email ThisBlogThis!Share to TwitterShare to Facebook