SPECIAL REPORT: GOVERNING BOARD OF ATV YOLA COMMENDS GOVERNOR FINTIRI'S INTERVENTION IN BRINGING BACK THE STATION ON TERESTIAL BROADCAST 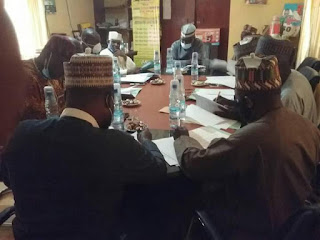 At its second meeting held at the corporation in Yola,the Adamawa Television Board of Governors has commended Gov. Ahmadu Umaru Fintiri for restoring the station on terestial broadcast.

It will be recalled that ATV has been on startimes for about six months ago following a strike by thunder on its equipments.

Similarly the Board has given the General manager Mal . Ibrahim Buba a vote of confidence for his deligence in handling the affairs of the station.

The Chairman of the Board Mr Sunan Muray disclosed this while making a closing remark at the end of its meeting in Yola recently.

Mr Muray equally commended the members of the Board for their cooperation and synergy towards giving the corporation the desired advise and encouragement.