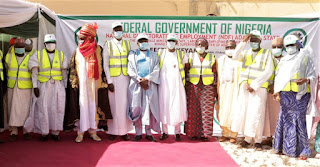 By: Yusuf Umar
He made this known at the flag off ceremony of the programme held at the Mahmud Ribadu Square.
Speaking through his Deputy, Chief Crowther Seth, Governor Ahmadu Umaru Fintiri salutes the Federal Government for its courage, determination and plan targetted at 774,000 young Nigerians, cut across the 774 Local Governments of Nigeria.
He said Government at all levels was made to battle with the scourge of poverty through different empowerment programmes, hence the introduction of the extended special public works programme by the Federal Government  aimed at poverty reduction.
The Fresh Air Government therefore, tasked the 21 thousand beneficiaries in Adamawa to take advantage of the scheme and do their best for the growth and development of the state and Nigeria at large.
The Hon. Minister of the Federal Capital Territory, Muhammad Musa Bello earlier in a remark said the scheme entrusted the beneficiaries with the mandate of rehabilation and maintenance of public infrastructure among others. He also emphasized that the initiative is in Nigeria's quest to win the war against mass unemployment as well as to amiliorate the socio economic effect of COVID 19 pandemic.
The Minister equally advised the beneciaries to justify their inclusion in the programme by being committed and deligence in discharging their duties.
In a remark, the Acting Director General, National Directorate of Employment, Abubakar Nuhu Fikpo represented by Joyce Yarnap also emphasized that the Agency has remained at the forefront in the fight against poverty and joblessness.
noting that the extended special public works programme initiated by the Federal Government marks the actualization of the single most far reaching grass root based employment creation scheme in the history of the country.
To show leadership by example, the deputy Governor Chief Crowther Seth and the FCT minister Muhammad Musa Bello demonstrated what await the beneficiaries.
Dignitaries present at the flag off include, the secretary to the state government Bashiru Ahmad, Chief of staff Prof. Maxwell Gidado, Head of service Dr. Edgar Amos among others.