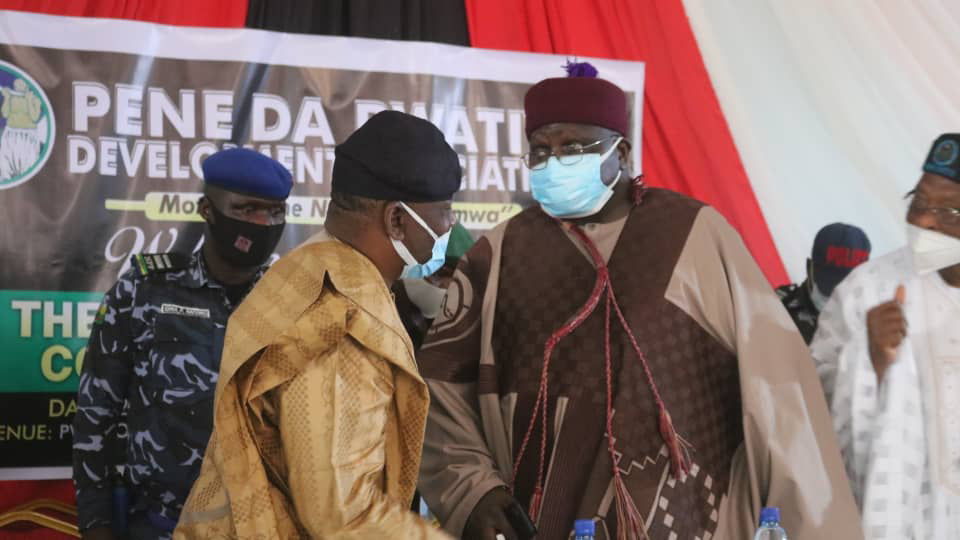 By: Yusuf Umar
Deputy Governor, Chief Crowther Seth has graced the National Executive Committee election of Pene Da Bwatiye Development Association with a call on the newly elected national officials to justify the confidence reposed in them.
He was at the occasion in company of a Veteran Journalist, Chief Timawus Mathias and a former member representing Lamurde in the state Assembly Michael Zidon.
Speaking at the National Executive Committee election of Pene Da Bwatiye Development Association held at Pwanobato recreational and event center, Wayam, Numan, Chief Crowther Seth commended the Association for coming this far and advised the incoming Exco to display the spirit of sportsmanship in their leadership.
The Deputy Governor discourages indecipline and backbiting among Bwatiye people for growth and development of the association. He also challenged them on the need for them to maintain the spirit of togetherness at all cost.
The number two citizen equally calls for support and cooperation from Bwatiye race to move the association to a greater height.
In their Goodwill messages, the Hama Bachama Dr. Daniel Ismaila Shaga and the Hamma Bata Alhamdu Gladstone Teneke among other speakers urged Bwatiye race to stand against any decisive tendencies, remain United and fought for a common goal.
The outgoing national president Pene Da Bwatiye Prince Hezron Audi Fada earlier in a remark said the occasion offers them the opportunity to elect new representative to pilot their affairs of the group for the next period of three years as stipulated in their constitution.
Established in 1974, he maintained that Pene Da Bwatiye and the entire Bwatiye race has so far left a landmark for others to emulate.
He cautioned against non-challant attitude to Union affairs and hate speeches among others, which according to him is detrimental to growth and development of the association and by extension Bwatiye nation.
The highlight of the occasion was the presentation of paper by the guest speaker Agoso Bamaiyi and traditional dances which added colour to the event.
12:10
Adamawa Daily Reports
New
Email ThisBlogThis!Share to TwitterShare to Facebook