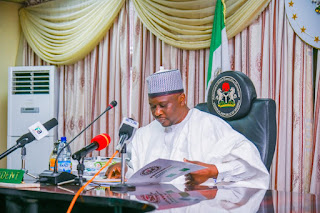 By Barnabas Augustine
18/8/2021
The Adamawa State Executive Council has in its fourth meeting of the year 2021, approved consultancy service for the supervision of the lingering Pella Maiha Road in the State.
The EXCO meeting that was presided by Governor Ahmadu Umaru Fintiri, also ratified the contract for the rehabilitation of 33kv and IDC line in the towns ravaged by the activities of the insurgents.
Briefing Newsmen after the meeting, Wednesday at the Council Chambers, the Commissioner, Ministry of Information and Strategy, Dr Garba Umar Pella disclosed that fifty six million, eight hundred and forty nine thousand, three hundred and ten naira (N56,849,310) was approved as the contract sum for the consultancy service for the supervision of completion of Maiha-Zhedinyi-Fulbere-Marraraba Pella road.
He added that the EXCO approved the services of MSSR A4 Associate Nig. Ltd for the supervision of the contract.
According to the Commissioner, the Pella-Maiha road has being a lingering problem since 2007. He said the government is committed to complete the project so as to open up rural areas and improve the economy of the State. And, the project will be completed within the shortest possible time.
Dr Pella explained that the consultant’s service was necessary in order to monitor the road project and ensure its timely completion.
Contributing, the Commissioner, Ministry of Works and Energy Development, Hon. Adamu Atiku explained that employing the services of the consultant for the supervision of Pella-Maiha road is necessary because the road was a fourteen year contract awarded by the Nyako administration.
According to Hon. Atiku, the contract was vied almost four times by the previous administration from about three billion naira to now nine billion naira.
Hon. Atiku disclosed that the present administration make it clear not to again vied the contract; that is why it employed the services of the consultant to ensure the contractor stick to the contractual agreement.
He said the road construction is still ongoing since the present administration came in and it has reached about 40% completion; stretching about 8km -10km since the employment of the services of the consultant, MSSR A4 Associate Nig. Ltd.
With regard to the contract for restoring electricity in the towns affected by the insurgents, the Commissioner of Information and Strategy, Dr Umar Garba Pella disclosed that the Adamawa Executive Council has ratified the contract for the rehabilitation of 33kv, IDC lines and township transformers in Madagali, Shuwa, Michika, Bazza and Watu towns.
He said the towns were hits by the activities of the insurgents and the damaged infrastructure were rehabilitated to enable the people return to their ancestral abode. Adding that Governor Fintiri led administration took it as a priority to rehabilitate the damaged electricity cables and transformers even when the government has no provision in the budget.
Dr Pella revealed that the contract was awarded in 2020 at the cost of two hundred and eighty three million, eight hundred and twenty thousand, two hundred and seventy-seven naira, seventy five kobo (N283,820,277.75) and the State Executive Council ratified the contract in line with the global based practice of appropriation.
The Commissioner of Information and Strategy said that the implementation of the project is building resilience and giving hope to the people; that peace have returned to their homes.
08:29
Adamawa Daily Reports
news:
Email ThisBlogThis!Share to TwitterShare to Facebook