By Ahmad Sajoh and Tom Garba 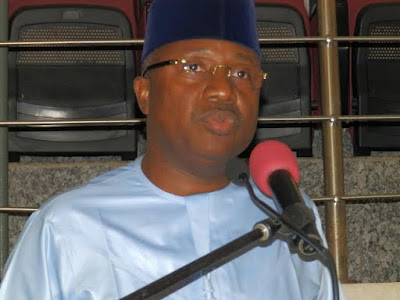 It was a Bloody Friday in Yola the Adamawa State capital on 23rd of October, 2015, as a suicide Bomber sneaked into a newly built Mosque which was being commissioned and detonated an explosive device which killed 30 people and left about 96 others injured. The Governor of Adamawa State Senator Muhammad Umar Jibrilla who visited both the Scene of the blast and the Yola Specialist Hospital expressed shock at the level of havoc the blast caused.

The Governor who was visibly shaken by the incident called on the people of the State to donate blood in order to save those that are severely injured. Senator Muhammad Umar Jibrilla directed Medical personel and the State Emergency Management Agency ADSEMA to ensure that all injured persons are treated free of charge. He charged the people of the State to be vigilant and to ensure that they report all suspicious characters to the security agencies.
Eyewitness account revealed that the bomb was detonated by a young suicide bomber in the vicinity of the mosque. One of the people who were within the vicinity of the Mosque when the blast occurred said "A young man sneaked into the vicinity of the mosque immediately after the prayer commences and detonated it leading to massive casualty," This was corroborated by several other witnesses who said they heard a very loud bang and then saw a lot of people socked in blood outside the Mosque.

A member of the first aid group of Jama'atul Bid'a Wa Ikhamatus Sunnah (JIBWIS) Mallam Yusuf Osama said the suicide bomber detonated his explosives shortly after the Friday prayers commenced "It is a gory site, people were killed in the blast and we were busy evacuating dead bodies and injured victims to hospital for a long time due to the high casualty rate. I believe the suicide bomber wanted to get access to the inside of the mosque so that he will cause massive havoc but before he reached the interior of the building, the bomb detonated. It is likely that one of the bodies I saw was the decapitated head of the suicide bomber which was lying among the mangled bodies of the victims," Osama noted. 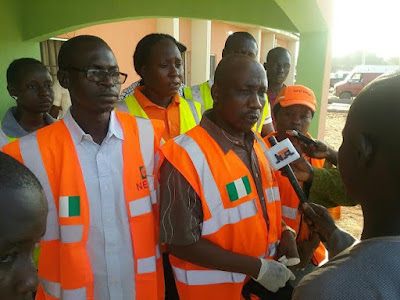 Both the Adamawa State Commissioner for Health Dr Fatima Atiku Abubakar who was personally directing Medical efforts and the Head of NEMA office in Yola Alhaji Sa'ad Bello who is coordinating humanitarian efforts confirmed that a total of 30 people had been confirmed dead. This is made up of 18 at the Yola Specialist Hospital and 12 at the Federal Medical Centre both in Yola. There are 96 people on admission at both the Hospitals. A Hospital source told Adamawa Daily Reports that the number of fatalities may rise as a result of severity of some of the injuries sustained.
10:00
Adamawa Daily Reports
Breaking News
Email ThisBlogThis!Share to TwitterShare to Facebook