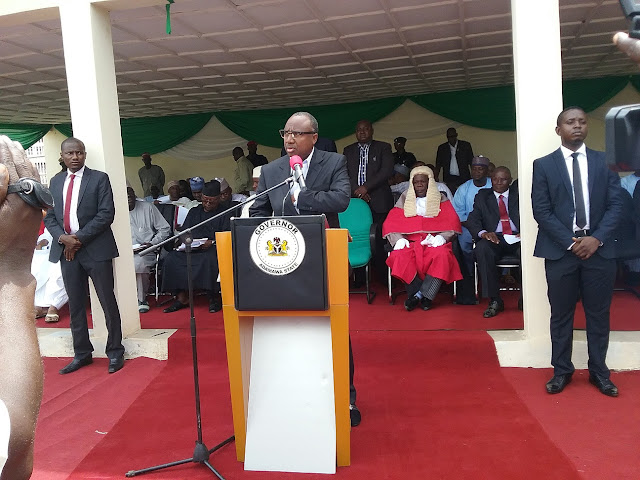 Judicial officers in Adamawa State has been urged to always adjudicate justice with mercy in the  discharge of their official responsibilities. Governor Muhammed Umar Jibrilla  made the called during the 2015/2016 Legal Year Opening Ceremony held at the premises of the State  High Court Complex Yola.

The Governor lamented that his Administration would continue to respect the judicial arm of Government ,explaining that the High Court buildings located around Police  round-about would be re-construction by his administration for effective performance of judicial  process in Adamawa state.
Governor Muhammed Umar Jibrilla  assured that his government  would do everything possible in seeing that  all their outstanding  entitlements and other  benefits are settled as soon as possible.


"I promise to reconstruct the police roundabout court as well as provide enabling environment for the judiciary to perform its statutory role to the state and  society at large".the governor said.

Earlier  in his speech  at the  occasion  the state Chief Judge, Justice  Ishaya Kida Banu appealed to the state Government  to as a matter of urgency implement the memorandum  of Understanding  (MOU) entered between Judicial staff union of Nigeria (JUSUN) and Adamawa state Government  so as to facilitate the effective dispensation  of justice in the state.

The state Chief Judge also appealed to the state  government  to see to the plight  of Judicial officers who were retired  and  are  yet  to be paid  their entitlements for the past Eight years.
He however,  thanked Governor Muhammed Umar Jibrilla for the  support given  to the state judiciary.

In a welcome address , the state  Attorney -General and Commissioner for Justice  Barr.Bala Silas Sanga described Lawyers and  members of the Judiciary  as social  engineers  in the society . stressing  that without judiciary  no society could develop and progress. He also urged  the Legal luminaries  to come  together  and work as a team for the  overall  development  of the Law profession.

It could be recalled that Governor Jibrilla on assuming office, ended the protracted strike by members of the Judiciary Staff Union in the State. The Governor also  provided two Toyota Land cruiser jeeps to the Heads of Courts that hitherto did not have any. He also provided ten Toyota Corolla cars to the Judiciary. With the development, all High Court Judges, Judges of the Customary Court of Appeal and Khadis of the Sharia Court of Appeal are adequately provided official cars.
10:39
Adamawa Daily Reports
News
Email ThisBlogThis!Share to TwitterShare to Facebook