By the Editorial Team 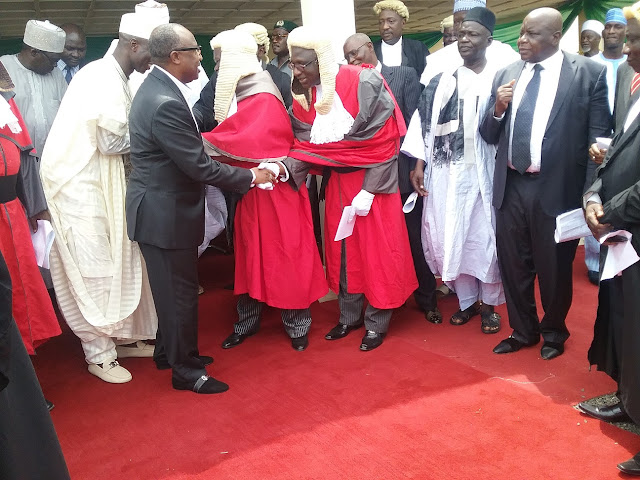 It’s been 10 years since a formal ceremony was held to herald the beginning of a Legal Year Adamawa State. This sad fact was disclosed by non-other than His leadership the Chief Judge of Adamawa State, Justice Ishaya Kida Banu. It is indeed a sad commentary on the neglect suffered by the judiciary in the past years. But it is also a reason to commend the current Governor of Adamawa State Sen. Muhammad Umaru Jibrilla who made it possible for members of the Bar and Bench to converge and hold a ceremony where their customs and costumes were on display.
But beyond the custom and costume lay more fundamental issues as the Adamawa State Judiciary mark the commencement of the 2015/2016 legal year. These fundamental issues were effectively captured by Governor Muhammad Umar Jibrilla when he listed them as comprising the need for Judicial reforms in order to fast track the administration of Justice. The Governor posited that the reforms are not only necessary in order to ensure quick dispensation of Justice but that they are absolutely necessary if the maximum of Justice delayed is justice denied were to remain meaningful. In addition Sen. Muhammed Umaru Jibrilla called on the Judiciary to modernize and embrace new technologies. We cannot but totally agree with his Excellency the Governor.
As a commitment to respect and reposition the Judiciary as an important arm of government, the Governor pledged to ensure that the provision for a conducive working environment for all Judicial workers in the State. And, to demonstrate that he promptly acceded to the request by the Chief Judge to demolish and reconstruct the High Court Complex located closed to the Police Round about in Yola. This is the kind of leadership that the people of Adamawa state deserve. A leadership that understands that every facets of our government process matters.
Of great relief to the people of the State is the fact that the Judiciary in Adamawa State is now poised to administer justice in a fast and efficient manner.  This is based on the pledge made by the Chief Judge at the ceremony marking the commencement of the 2015 /2016 Legal Year which was held at the High Court premises in Yola on the 7th of October, 2015. This is further proof that Adamawa is indeed working under Governor Muhammed Umaru Jibrilla.