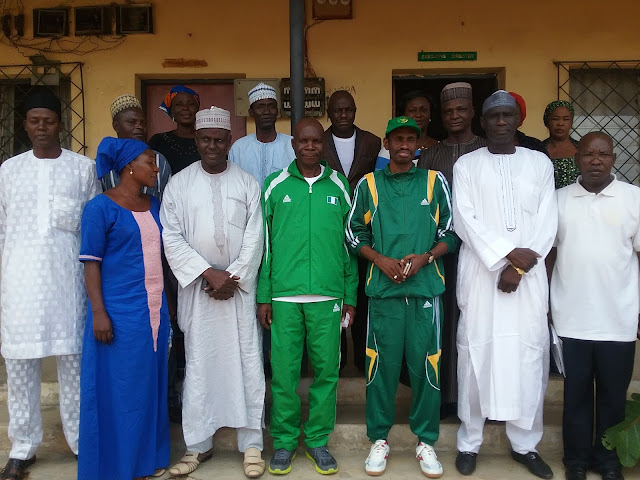 The Hon. Commissioner Ministry of Youths and Sports Barr. Suleiman Aliyu disclosed this during his visit to Adamawa Sports Council as part of his familiarization tour of establishments and facilities under his Ministry. He said, the government is redirecting its energy towards sports development in the state.

He also intimated that  the  government  has  short and  long  term  plans to  turn around the  fortunes of Sports in the  state. He emphasized that under the short term plan of resuscitating sports, the government will embark on an aggressive reconstruction to complete the abandoned sporting edifice in the state.

According  to  him, the state has  a history  of  Sporting  supremacy which is  currently  dwindling due  to  lack  of  attention given to  sports by successive administration. He  also said, the  ministry  will  embark  on  training  of athletes  and  officials where necessary  to  promote  sporting activities in the state towards  achieving positive result. He added that the governments will synergies with relevant agencies to redefine sports and restore its lost glory.

On the other hand, the  Executive  Director  of  the Sports  Council Mal. Umar B  Nekendawiri said   the  visit  of  the  commissioner  was  not  only  historic  but has  the  prospect  of  repositioning sports in the state. He also emphasized that the council is crippled   by lack of sporting equipment and facilities which is a major factor that degenerated sporting activities in the state.

Lastly, Mal. Umar sought  the  cooperation  of  the  government  in  supporting  the  proposed  Adamawa State Sports  Festival which is scheduled  for  December 2015. He added  that both  government  and  private  sectors  should  partner in order  to promote  sporting activities  in the  state.
The Hon. Commissioner was taken round to inspect the available facilities and equipment’s on ground.
09:49
Adamawa Daily Reports
News
Email ThisBlogThis!Share to TwitterShare to Facebook