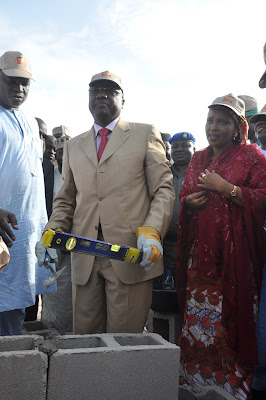 overnor Mohammed Umar Jibrilla has proven his administration’s resolve to move Adamawa State forward not only in terms of human development, but laying foundation for modernizing and industrializing the State.
Although five months is not enough time for stock taking, the Governor Jibrilla led administration demonstrates it concern for socio-economic development of the State and also appreciates the peoples mandate and their expectations.
His administration has among other developmental strides earmarked over Five Hundred Million Naira for disbursement to over 9,000 youth and women across the State as well as training of over 100 youth and women in collaboration with the Sir Ahmadu Bello Foundation in order to make them economically self-reliant.
In its first 100 days, the administration laid a blue print for the development of Adamawa State as well as fulfilling its promises to the electorates in the following policy thrust:
1.       Improving the state Revenue base.
2.       Curtailing waste, blocking leakages and zero tolerance for corruption.
3.       Transparency, Accountability and prudent management of scarce resources.
4.       Effective supervision of projects and service delivery including monitoring and evaluation.
5.       Keeping to time frames and prioritizing of projects.
6.       Effective motivation of workforce as the engine room of government.
Going by the hindsight of the State, Governor Jibrilla assembled a team of patriotic indigenes of Adamawa State to serve as a vehicle for effective service delivery; this was evident in the appointment of Secretary to the State Government, Honourable Commissioners and members of the State Executive Council.
The administration through the able leadership of the Honourable Commissioner for Information, Comrade Ahmad Ibrahim Sajoh has conceptualized a Strategic Communications Policy geared towards social harmony, mutual trust, community cohesion, greater safety, food security and to bridge the disconnect between government and the electorates.
For a better performance and result oriented civil service, Governor Jibrilla has adopted and implemented recommendations of the Report of Committee for the Verification of Adamawa State Government Workforce, a committee initially appointed by the immediate past administration.
He also renewed the committee’s mandate to cover all Local Government Councils in the State for the Staff Verification Exercise as part of the administration’s efforts to plan for a better workforce and ascertain the actual workforce on the government payroll.
Consequently, issues of outstanding salaries, Leave Grant, Pension matters, other entitlements and welfare of civil servants have been given the much desired attention.
He has also approved the Judicial Financial autonomy making Adamawa one of the few states in the Federation to implement such.
Considering the role Civil Servants play in the development and success of any government, on assumption of office, Governor Jibrilla paid an unscheduled visit to the State Secretariat Complex where he directed the Secretary to the State Government to work out modalities for the immediate rehabilitation of the Secretariat complex with a view of providing conducive working environment for Civil Servants. Capacity building is also an area that has received attention from this administrations.
The administration procured fertilizers amounting to One Billion Naira for distribution to farmers. This is to ensure boost in this year’s farming yield.
Within the period under review, Governor Jibrilla embarked on rehabilitation and construction of 23 township and rural road projects across the State and also paid and completed the remaining 36% of the construction of Waziri Street and Gassol Street roads project in Karewa extension which was inherited by the previous administrations.
The roads awarded are as follows:
1.       Roycon & Co Nigeria Limited
-          Gumti – Challawa – Hammanyero Road (Faro/Adamawa Sunshine Park Road): 2Km (out of which 1Km is dual carriage way).
-          Bole street and extention (Massakare).
The 2No. Roads were contracted at the sum of One Billion Three Hundred and Ninety Five Thousand Five Hundred and Seventy Five Thousand Nine Hundred and Twenty Naira Twenty Four Kobo (N1,395,575,920.24).
2.       Triacta Nig. Ltd.
-          Lamido Mustapha – Damare – Cemetery Road (2.4km)
-          Alkasim Street (820m)
-          Demsawo – Wukari and Ghana Streets (2Km)
-          Sarkin wuta street (750m)
-          Zango street (750m)
-          Off Jimeta Bye-pass road (1.5km)
-          Church Street and part of Jambutu Street (1.1km)
-          Rumde Street (760m)
-          Mayo-Belwa Street (780m)
-          Ahmed Talib Street (480m
-          Jambutu road network (5.3km)
-          Wauro Jabbe Road (2.8km)
The 12No. Roads were awarded at the sum of Four Billion Five Hundred and Twenty Three Million Nine Hundred and Sixty Five Thousand Three Hunded and Twenty Two Naira Sixty Four Kobo. (N4,523,965,322.64).

3.       Tec Engineering Company (Nig.) Limited
-          Yola Bye-pass road (5.5km) at One Billion Ninety Seven Million Seven Hundred and Sixty Nine Thousand Eight Hundred and Twenty Six Naira Ninety Five Kobo (N1,097,769,826.95).
As part of the administration’s effort to boost the revenue base of the state, the moribund Yola International Hotel is being rehabilitated in this regard.
This administration is also exploring the untapped tourists’ potentials of the state so as to attract revenue and put the State on the world map of tourism destinations.
Due to the enabling environment created by this administration for Public Private Participation, the State Government in partnership with KD Properties Limited has embarked on construction of 300 Housing Units as part of efforts to ease housing problems in the State.
In order to ensure strict compliance to contractual agreement as well as ensure prompt completion of projects, Governor Jibrilla embarked on inspection of projects across the State.

He has within the first 100 days received visitors, investors, partners within and outside the country on courtesy calls and expression of interest to invest in the Land of Beauty. The Government also hosted in the state Progressive Governors Forum for a retreat.
Considering the great role Traditional Institutions play in maintaining peaceful coexistence in the State, the Governor has involved the Traditional Rulers along with other Security agencies in mapping out strategies to combat insurgency and ensure prompt and adequate security of lives and properties of the citizens which is one of the primary responsibilities of Government.
It is evidently clear that, Senator Mohammed Umar Jibrilla administration’s efforts has now restored hope to the people of the State through laying a more solid foundation of the development of Adamawa State. 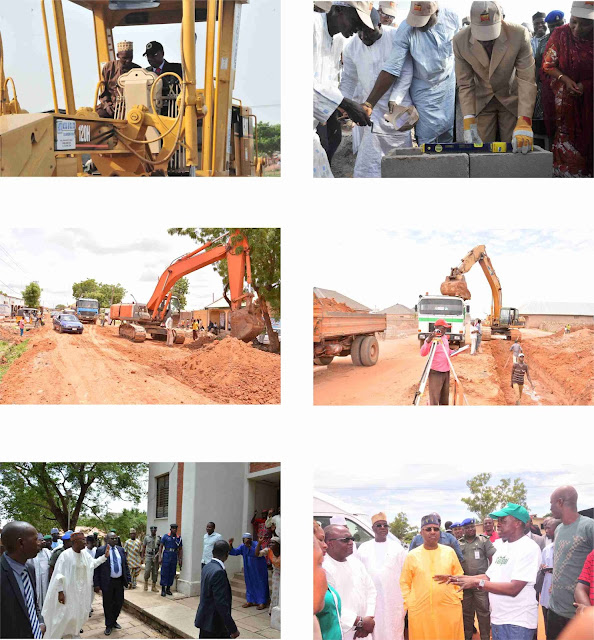