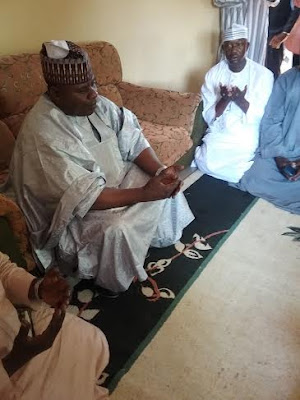 Governor Muhammad Umaru JIBRILLA has described the demise of ma Hajiya Dadaji Ajiya grandmother of the wife of LAMIDO Adamawa Hajiya Aisha Mohammadu Barkindo Aliyu Mustafa as not only a great lost to the people of Adamawa but the entire country in general.
The Governor who was represented by his deputy Rt. Hon. Martins Nasir Babale said mama Dadaji as she is popularly known would continue to be remembered because of her contributions to development of the society adding that the late octogenarian has produced sons and daughters that have been making impact towards a better society.
Deputy Governor Babale prayed God for a peaceful repose of her soul and to give the family the fortitude to bear the irreparable lost.
Responding, one of the granddaughters Hajiya Aisha Barkindo Mustafa wife of LAMIDO Adamawa expressed appreciation to the government of Adamawa for identifying with the family at this time and pray God to reward them abundantly.
Aged 99years, late mama Dadaji is survived by 6 children, 27 grandchildren and 36 great grandchildren. She has since been buried according to Islamic injunction.