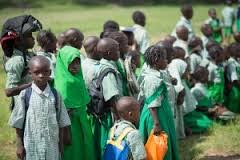 “The national council on education (NCE) in 2006 approved the establishment of schools based management committees (SBMCs) in all schools in the country. Following ratification by the Honourable Minister of Education in 2007, guidelines for the implementation of the NCE policy were issued by the Universal Basic Education Commission (UBEC) to all State Universal Basic Education Board (SUBEBs) to implement SBMCs in their states. SBMCs have since been established. However, for a variety of reasons, most SBMCs have not been functional. It is in recognition of these shortcomings that ADSUBEB has established the necessary framework and set in motion a policy of the SBMC guidelines to promote effective performance and advance the state and local government’s commitment to the attainment of the Millennium Development Goals (MDGs).” Source; Adamawa State Policy of  SBMC, 2012.
Dr. Halilu Hamma the former Executive Chairman of ADSUBEB said, “The prime purpose of SBM is to improve schools. SBMCs act as a bridge between schools and the communities they serve. They contribute to school planning, and provide support to school activities. They also exercise over-sight of the performance of the school and the quality of education provided. It is important to view the development of SBMCs as part of a wider strategy for school improvement.”
ADSUBEB under the directives of UBEC launched a 3 - Day Visioning and Domestication of Sbmc in the state in September 2012 at the ADSUBEB conference hall. However, the then Director of Social Mobilization Alhaji Bashir D. Tukur who is now the Permanent Secretary of Ministry of Education started the campaign in the same year. He succeeded in the formation of the state SBMC as well as that of the grassroots level.
It might interest you to know that almost all the public and private schools in the state have sbmc members.  But, the question is; are they functional?
However, the present Director of Social Mobilization Hajiya Fadimatu Alfa is still on the run to ensure that sbmc continue to function in the state. Recently, the Social Mobilization team of the Board has done some sensitization on the  related matter; The roles of sbmc in school development and maximizing community contribution to school development. They rallied over the  6 geopolitical zones of the state.
The main objectives of SBMC are to:
·
·
Interest Group                                                 Number in SBMC

On a final note, I will like to leave you with the following questions;
Have you ever heard of sbmc before?
Are you a member of sbmc?
Do you have it in your school?
If you do, is it a functional one?
Are you aware of the functions and objectives of sbmc?
Let’s join ADSUBEB in the campaign for a functional sbmc in the state ,let’s not leave everything in the  hands of government because the government has a lot of things to take care of . I see this as a great opportunity for those of us who desire to make things right when things go wrong.