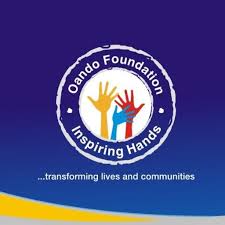 Oando Foundation is an independent charity Organization that is set to empower communities as well as supporting Nigerian government in realizing it’s developmental goals. It might interest you to know that the long term thrust of the foundation is contribution to the attainment and achievement of MDGS targeted at access to Basic Education.
The foundation through its Adopt-A- School Initiative AASI project adopts schools to reinforce Primary Education to the general public across Nigeria. The adoption of schools is done annually based on set criteria.
They select, adopt and sponsor the best 10 final year pupils from each of the adopted public schools through their secondary education. Each must score an aggregate of 70% from the combined total of his/her primary 5 and 6 results including their  continuous assessment and end of the term examination.
Oando Foundation has a partner here in the North to ensure proper management of it scholarship programme in three states; Bauchi, Kaduna and Katsina. Also, the scholarship award covers direct and indirect costs of education. The name of its partner is Community Action Popular Participation  CAPP
Do you know that OANDO already have over 170 in Kaduna,  Katsina, Bauchi, Adamawa, FCT, Taraba, Sokoto,  Plateau and Niger states? Oh yes. It has adopted two (2) schools with the collaboration of Adamawa State Universal Basic Education Board (ADSUBEB ) since 2013. The names of the schools are; Nyibango Primary Schools and Gwadabawa Primary Schools both in Yola North.
The selection was however conducted by a team from the Foundation, School Based Management committees  (SBMC s),  Parent Teacher Association  (PTA) and ADSUBEB.
During the occasion of the scholarship award in October 2013 at the ADSUBEB conference hall, Dr John Sakiyo a team leader from the foundation said, Nyibango and Gwadabawa Primary schools has won the favour of the  foundation and that the award will cater for the pupils school fees,  uniforms, books and also their up keep allowances.
I could remember the remarks of the then Executive Chairman of ADSUBEB Dr. Halilu Hamma. He commended the gesture of the foundation and called on other Private Organizations to emulate the gesture. He also urged the parents of the beneficiaries to ensure serious monitoring of their wards in order to keep the fire burning.
Early last year, the foundation had distributed Scholarship awards to JSS 1 students. They were give #20,000 each for their registration.
Bravo Oando foundation keep the good work.
10:07
Adamawa Daily Reports
Opinion
Email ThisBlogThis!Share to TwitterShare to Facebook