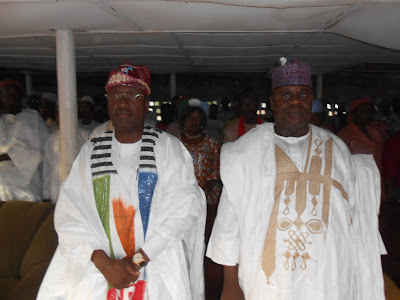 The Governor of Adamawa state, Senator Muhammadu Umaru Jibrilla Bindow has cautioned the entire citizens of the state especially parents to warn their children from joining any form of barbaric groups that can lead  to terrorism.

Bindow said this in a program organised by the Christian Association of Nigeria program (CAN) to mark the independence day which was celebrated in a low-keyed because of insecurity reasons.
Jibrilla who revealed this through his Deputy ,Hon Martin Nasir Babale on representation during CAN independence day program in LCCN cathedral in Yola.

He emphasized the vision of the Government in Reconstruction, Rehabilitation and Resettlement of the thousands of people who have been ravaged by the attacks of Boko Haram.
"This occasion is celebrated in yet another moment of trials resulting from the dwindling nature of our economy and the unfortunate inhuman attacks of Boko Haram Insurgency  confronting our our dear state and the entire North-East Region. The Low-keyed Celebration calls for sober reflection and more prayers for the state and the Nation." Babale said "Brother and Sister while we placed our attention on the Reconstruction, Rehabilitation and Resettlement of our people, who have been ravaged by this unfortunate development, His Excellency has directed that in order to move our state forward,we must find a way to prevent our young people from turning into terror and terror activities in the first place." He added

Babale continued to say that ,the Young people who turn into extremism do not exist in a vacuum they are part and percel of our communities and families, who have been  lured into the fold of Barbaric and Nihilistic organisations, some how, through misguided appeal to their worst fears, expectations and indeed apparent frustration.

He also assured the christian gathering of their commitment to good governance in providing the needs of the people of the state by running an accountable and transparent government.
01:06
Adamawa Daily Reports
News
Email ThisBlogThis!Share to TwitterShare to Facebook