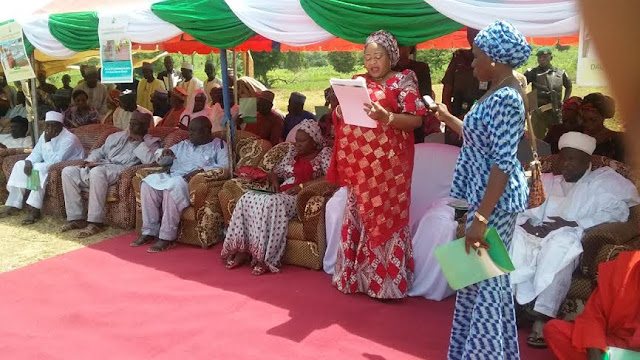 Adamawa State Ministry of Education has taken the Campaigns to revamp the Education Sector to Insurgency ravaged Areas of the State. The Hon. Commissioner of Education Dr. Kaletapwa G. Farauta an Associate Professor of Education told Adamawa Daily Reports that her priority is to ensure that these areas that suffered series of deprivations as a result of the unfortunate incident are back on stream.

To this end, Dr. Farauta had engaged several development agencies and NGOs in a bid to partner with them in the process of restoring Education in Adamawa State with Particular emphasis on the Insurgency ravaged areas. In this wise the Hon. Commissioner had received the support of UNICEF and a renowned NGO known as North East Regional Initiative or NERI for short.
Two events took place on the 30th of September and the 1st of October as the take-off of the initiatives. One was in Maiha Local Government while the other is in Gombi Local Government.The event of 30th September was the launching of Containerized Mobile Schools which is meant to ensure that even when infrastructure is destroyed Schools can resume in containers withing short periods. At the occasion, school items such as books, writing materials and others were distributed to some of the pupils in a symbolic gesture signifying that schools will go on no matter the odds.

The second event was held on the 1st of October, 2015 and it was in Gombi 1 Primary School. The event was organized by the Ministry of Education in conjunction with NERI. It was an event meant to tell the world that even though the insurgents had destroyed infrastructure in schools they have not destroyed the spirit of the parents and students. An Art exhibition and an Essay writing competition was held for both Primary School Pupils and Secondary School Students. It was well attended and NERI provided several prizes for all the students who participated in the competitions.

It was meant to signal a commitment to rehabilitate some vandalize school structures in the state and to reward excellence among students. The theme of the competition was "Why I Love Nigeria" The competition involved pupils in public nursery, primary and secondary schools. It was attended by the Honorable Commissioner of education Dr. Kaletapwa G. Farauta, her colleague in the Ministry of Information Comrade Ahmad Sajoh, NERI Program  Manager Adamawa State, Mallam Abubakar Mustapha Baba, the District Head of Guyaku Alh. Barde, among others.
01:00
Adamawa Daily Reports
News
Email ThisBlogThis!Share to TwitterShare to Facebook