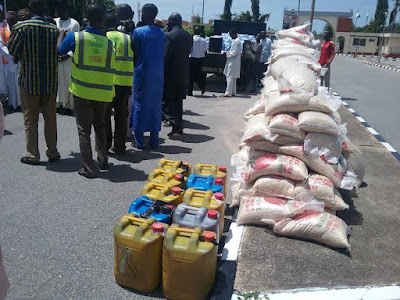 The National Emergency Management Agency (NEMA) has donated assorted relief material to over 130  victims of flood disaster in 15 Local Government Areas of Adamawa.
Announcing the donation Friday during a courtesy call on Governor Muhammadu Jibrilla, the Director General of NEMA, Alhaji Sani Sidi, said he was in the state to present the donation and commiserate with the government and people of the state over the flood which led to lost of three lives and properties.

Sidi urged states in flood prone areas not to relent in sensitizing communities in such areas to move to safer grounds.
" You also need to sensitize the public on dangers of indiscriminate dumping of refuse in drainage", Sidi said.
He lauded Adamawa government for the support it has been according NEMA in the state particularly in  handling the problem of Internally Displaced Persons (IDPs).

Sani said that the support NEMA got from the Adamawa State Emergency Management Agency (ADSEMA) had helped in the effective handling of thousands of IDPs in 12 camps in the state.
" With the support so far we were able to collapsed many camps reducing the number to five" , Sidi said.

In his response, Gov Jibrilla lauded NEMA for the gesture and assured that the materials would be utilize judiciously.
" We thank NEMA for always coming to out aid  in times of need", Jibrilla said.
While in Yola, Sidi and his entourage which included the Secretary General of Nigeria Red Cross Mr Bello Hammandiran also visited Hospitals to sympathized with victims of last Friday bomb blast.
22:47
Adamawa Daily Reports
News
Email ThisBlogThis!Share to TwitterShare to Facebook