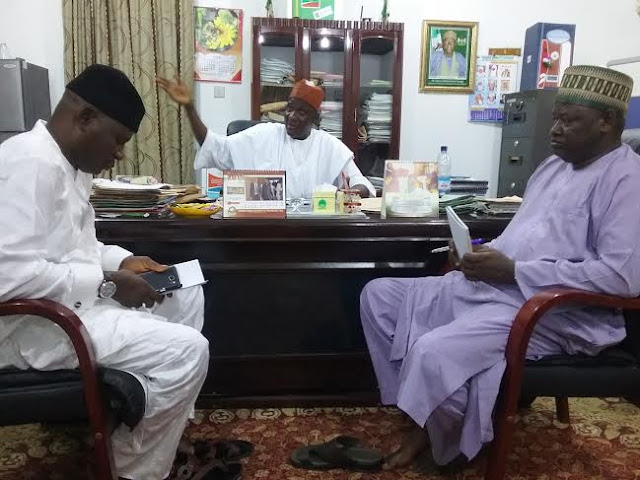 The State  chairman of the Union Comrade Dauda  Maina while stating the reason for their visit intimated the Leadership of ADSUBEB a number of issues  challenging the union. According to the Chairman,  some of these challenges include the need to address the engagement of unqualified teachers to teach at the basic level of Education. Others are matters related to the three years outstanding Leave Transport Grant. Comrade Dauda Maina observed that there is a communication gap  between  the  Board  and the Ministry  for local government and he called on the Board  to ensure that such gaps which are inimical to the welfare of their members are effectively bridged.

In his response, the  Executive Chairman  (ADSUBEB), Dr. Hassan  Mohammmed Toungo,  expressed apprciation to the Union and commended  them for  intimating  him about these crucial matters. Dr. H. M Toungo says  as someone who has been a teacher all through his life, right from primary, to Tertiary level, teachers'  welfare  has always been his priority.  In his  word “ I remain a teacher and value the teaching profession”

The  Executive  chairman informed the union  that he has personally discussed and presented a memo to the  Executive  Governor, His Excellency , Sen. Mohammmed Umaru Jibrilla regarding  the issues. He  assured them that the  Adamawa State Government is committed to the welfare of teachers and assured them that the payment of all outstanding entitlements will commence within the shortest possible time.