OPINION: Martin Babale: The loyalty of a visionary Deputy Governor of Adamawa state 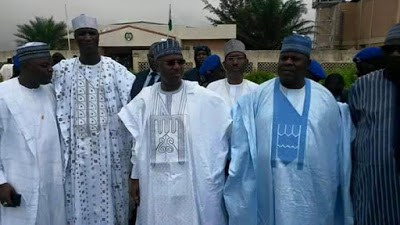 Permit me to borrow the words of John Mason "Humility is a vitreous of a great leader grafted in the vision of who he is loyal to for achieving aims and objectives,bringing out purpose as a driving wheels to high attitudes of people's destinies".As the common adage says "Royalty pays", I am sceptical to the later adage than to the former, i agreed to the affirmative,yes it does pays but not on self enrichment as the general notion and acceptance of the terms (Loyalty pays) by many.
As connote it to be a payment back to any loyal person on ground of personal benefits, probably on what he knows he can be settled back. Many fake loyalty , making it an eye service of a thing, of course being hypocritical to the detriment of many followers.

Unlike this Man that owned a God given form of loyalty and humility.This great virtue of leadership quality is seen in a Man called gentle and humble Martins Babale the Deputy Governor of Adamawa people. Martin will be best described as the Bible humble Moses whose great humility has earned him a name as the most " Meekest Man on earth", probably I will allowed the opportunity to say that Martins is Meekest Deputy Governor in the country. You may want to argue my assertation, but permit me to say the following reasons you might be convinced is says what I said.

Before assuming the present office, Babale on many occasions affirmed to the people of Mayo-Belwa,Jada,Ganye and Toungo whom he served on two consecutive terms on representation in the National Assembly (House of Representative) and i quote that "what he has and will ever have is for the people". Even when he served as a lawmaker in the green chambers, Martins sees himself as the property of his people, a using instrument in the hand of a willing user. With many Bills he enacted in to laws which time will not permit me to expatiate, but in his nature as a humble man he does not want to blow off his trumpet,rather in that regard, he will always want to attends to his people's needs.

His choice as the deputy Governor of Adamawa state is a wisdom many are appraising the decision taken by Governor Bindow Jibrilla  to have Babale as a progressive partner in bringing faster development in Adamawa state. His attitude as a visionary leader, always walking closer to his principal leader (Bindow), the Man Martin itch for assignments not minding the tasking nature of it, his believe is that they are called to serve and he does not have any excuse not to so

Observe him in a function, the only thing that will make you realise his presence is his smiling face, the Man that you will hardly see when is in an angry mode. Recently People beginning to nickname him as "Mr Smile", a character that portrays the goodness of a personality. Visit Mr Babale during official hours, believe you me he has an apt listening ear to every discussion not minding who says what, all he does , he give you all the time with his good listening ear to deduce wisdom from it. To him there is sense to every none sense- what a good leader.

Indeed every humble man is certainly a hard working Man, if you are close to any aide of him they will tell you the Man Martin is a 24hours productive working Man that believe on hardworking is a key to breakthrough. With the humility nature of this hard working Deputy Governor during the era of change, another mile stone of change will be rolling to set Adamawa people free from any shackles of under development and all forms of  economy stagnation.
07:45
Adamawa Daily Reports
Opinion
Email ThisBlogThis!Share to TwitterShare to Facebook