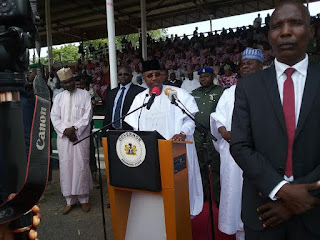 Christian Pilgrims have been called upon to be good ambassadors of the state and the country at large while in the Holy land.
The Governor of Adamawa State Senator Mohammed Umar Jibrilla made this call during the farewell of the 2015 Adamawa State intending Christian Pilgrims to Jerusalem on Monday 2nd November, 2015 at the Mahmud Ribadu Square, Yola.
He reminded the pilgrims to pray for peace in the state and country in general, urging the citizens of the state to always tolerate one another to ensure a meaning development.
Earlier in his response, Adamawa State leader of Government Delegation for the 2015 Christian Pilgrims, His Royal Highness Hamma Batta Homun Alhamdu Gladson Teneke said 665 contingents from Adamawa State will participate in the 2015 Pilgrimage to Jerusalem.
While appreciating the efforts of Governor Mohammed Umar Jibrilla to the plight of the pilgrims, the Royal Father assured the Governor that the State Contingents will be of good conduct in the Holy land.