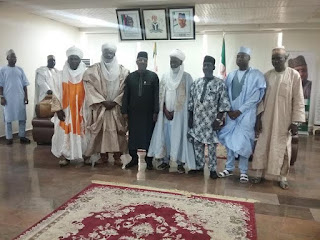 By Yunusa Abdullahi
04-11-2015
Muri Emirate Council of Taraba State has commiserated the government and people of Adamawa state over the recent bomb blast in the state.
The Emir of Muri His Royal Highness  Alhaji Abbas Tafida  who was represented by the  Waziri Muri  Alhaji Umaru Ibrahim during a courtesy call on Governor Muhammed Umaru Jibrilla  at Government House Yola, said the  emirate  has received  the sad news with great shock over the unfortunate  incident which claimed so many innocent  lives and properties. .
He described  the cordial relationship  that existed between the  people of Adamawa and  Taraba  states as brothers and sisters  and urged  the  people of the  Twin  states to maintain the tempo.
The Royal Father also commended Governor Muhammad Umaru Jibrilla for the effort and assistance rendered to Taraba State  contingent of the 2015 Pilgrims at Yola International  Airport during their trip to perform the  2015 pilgrimage at the Holy Land ,and pray Almighty  God to reward  him for his good deeds.
While responding, Governor Muhammed Umaru Jibrilla appreciated the gesture of the delegation for sympathising with the people and government of Adamawa state. The Governor maintained that Traditional Rulers are the custodians of cultural system and values of the society.
He on the other hand,  condoled  the Government and People of Taraba state  over the  death of  Kpanti  Zing  and District  Head of  Garba chede who lost their lives while performing this year's Hajj at the Holy Land.