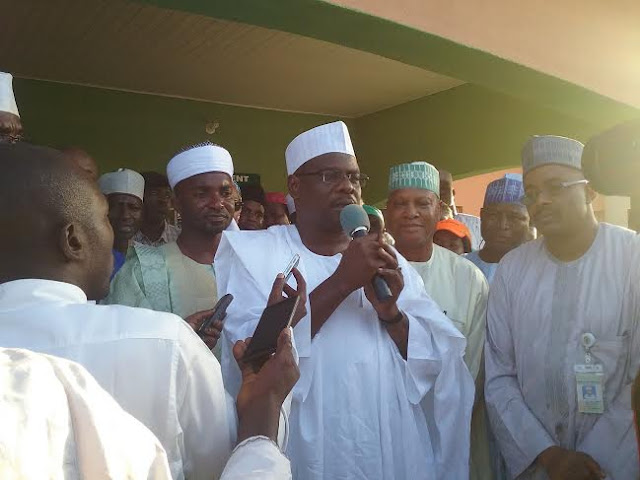 About  One Million Naira has been donated to the victims of the recent bomb blast at Jambutu Jummat mosque  by the Senate on Sunday the 8th of November, 2015. This was announced  by the  Senate  Leader Senator  Ali Ndume  who led Nine other Senators from the National  Assembly that visited  the victims of the bomb blast  at the Federal Medical Center  and Yola  Specialist Hospital  to sympathise  and commiserate  with the  government  and people of Adamawa state over the unfortunate incident which claimed so many lives and injured  innocent people  at the Jambutu  Jummat mosque  recently.

Senator Ali Ndume revealed that the sum of Five Hundred  Thousand  Naira  each has been donated  in assistance to the  victims who were receiving medical attention at both the  Specialist Hospital as well as the  Federal Medical Center Yola. He  stated that the Senate delegation  were in Adamawa state  on behalf of the Senate in particular and the National Assembly in general to bring soccour to the victims of the bomb blast  and also  to collaborate with  other relevant  agencies such as NEMA, International Committee of the Red Cross  Society  and other NGOs  in the country  on how to assist  the victims.
Senator Ali Ndume  also explained that the  National Assembly is looking for the possibility on how to upgrade the  Federal Medical Center Yola to  a Teaching  Hospital status,  stressing that all the senators from the North East region were in support of the  move on upgrading the  centre to a Teaching  Hospital. The delegation prayed for the peaceful repose of the souls of the deceased  and prayed to God to give the  families the fortitude  to bear the loss. The Senate Leader also prayed  for the quick  recovery  of those that  were receiving medical  treatment at the hospitals.

While receiving the  delegation from the National  Assembly, the Chief  Medical Directors of Specialist  Hospital Yola Dr Bala Saidu  and that of Federal  Medical Center  Prof  Awwal Muhammed  Abubakar  thanked  members of the Senate  for the sympathy and concern shown to the victims of the bomb blast  and assured them that the assistance  given for treating  victims would be  judiciously utilised  for the  purpose  intended. The Chief  Medical Directors  also informed the delegation that  they received  similar donations from other organisations like NEMA, International  committee of the Red Cross and other wealthy individuals who came to the  aid  of the victims at the  Two Hospitals.

The Chief Medical Directors however  revealed that already most of the patients who sustained minor injuries   have been treated and discharged while few others were receiving medical attention at both centers. All the Three Senators from Adamawa state accompanied the delegation from the National Assembly which include Senator Abdulaziz Murtala Nyako representing Adamawa  central, Senator Binta Masi Garba representing Adamawa  North  and Senator Mohammed  MoAllahyidi  representing Adamawa  Southern  Senatorial  zone respectively.
23:16
Adamawa Daily Reports
News
Email ThisBlogThis!Share to TwitterShare to Facebook