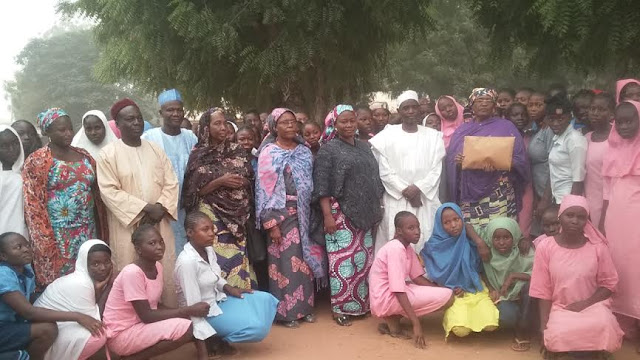 BY: Atenka John
The Executive Governor of Adamawa State Senator Mohammed Umaru Jibrilla, had on Tuesday December 2nd 2015, revived the long forgotten feeding scheme in boarding schools across the State.
The Governor Directed the Commissioner of Education Dr. Kaletapwa Farauta to immediately distribute fifty bags of grains which included Maize, Rice and Beans to each of the Boarding Schools with a Special Monetary Package, to ensure quality feeding in the schools. The distribution started with the Government Girls Secondary school Yola, followed by General Murtala College,Vina- lovable Government  College Numan. The team is to cover all boarding schools in the State. 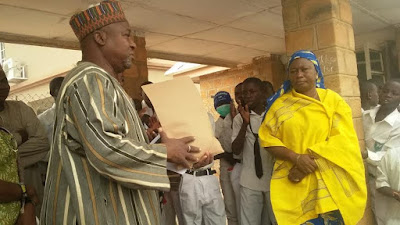 The Commissioner who was accompanied by the Permanent Secretary Alhaji Bashir Yerima D. Tukur Said “ The gesture is in fulfillments of His Excellency’s campaign promises to strengthen the education sector”, she added  that the Government will soon embark on renovating and building Schools Across the State.
On his part, the Permanent Secretary cheered the Students when he called them as potential future Presidents, Governors, Senators Commissioner's.  “We all now a society without sound and qualitative education, is a society without future” he concluded
The principal, Government Girls Secondary school Yola, Mrs Fifkatu Aminu Magagi, appreciated the State Government for coming to their aid at the right time. She said “The present Government has reminded them of almost forgotten memories” and promised to utilize the items for the purpose intended”. 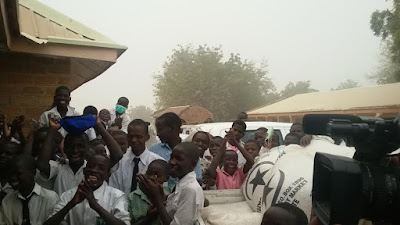 Some Students, who spoke on behalf of their colleagues, equally appreciated    the Government and promised to reciprocate the kind gesture with excellence.
Dignitaries who accompanied the Commissioner to the schools were the Executive Secretary Post Primary Schools Management Board Hajiya Bilkisu Kaliq and Directors from the Ministry, Boards and parastatals.
07:56
Adamawa Daily Reports
Breaking News
Email ThisBlogThis!Share to TwitterShare to Facebook