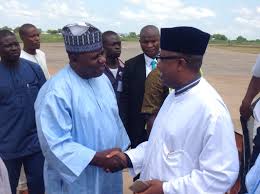 By Atenka John
The Executive Governor of Adamawa State, Senator Mohammad Umaru Jibrilla, had on November 10th /2015 approved the Construction of a Cement Factory in Guyuk Local Government Area of the State through some American Investors. This was disclosed when the team of investors met with the Deputy Governor Hon. Martins Babale at his office.

The Factory if completed is expected to cut down building cost for the common man as well as generate electricity to the host community.  It will also go a long way in catapulting the state to an industrial in region.

The company is to Produce one Million Tons of cement annually. The project is estimated to cost one billion US dallars, with two years expected period of completion.

With this development, the teaming unemployed youths now have a course to smile as the company has the capacity of  twenty thousand (20,000) skilled and unskilled work force with millions of indirect work force that could work under wholesalers, retailers as well as project sites across the Country.