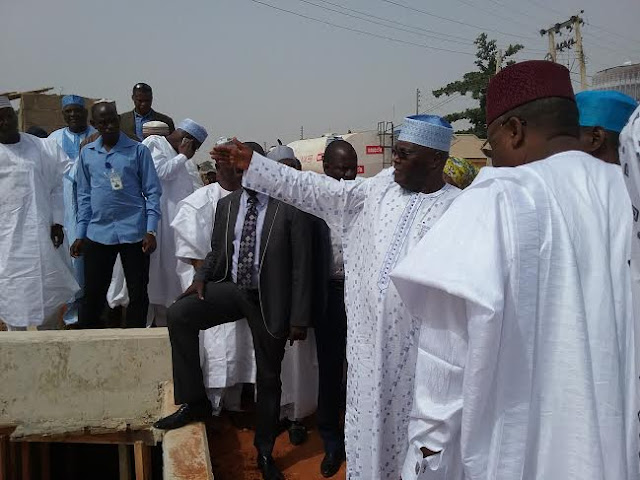 BY: Yunusa Abdullahi
Former Vice-president Atiku Abubakar commended Governor Muhammed Umar Jibrilla for his giant strides in developing Adamawa state. The Former Vice-president  made the commendation  when he  accompanied  Governor Jibrilla  and other important  personalities inspected  on going roads construction  projects  across the  state capital.
The Turakin  Adamawa  said  ''You can see in just Five Months what he has been able to  achieved, if assuming that he has been in power for the past  Eight years  in office  Yola, the State  Capital  of Adamawa  would  have become an International  City ".
The Former Vice-president  also commended  the construction  companies  for under  taking  a standard  construction work and urged them to maintain the  quality of  work which he emphasized that the State Government  is not compromising  the quality  of the work. 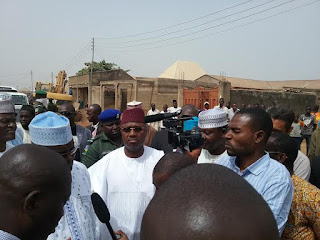 He however  appealed to the citizenry to give all the necessary  support and cooperation  under  Governor Muhammed Umar Jibrilla  administration   so that he can continue  with the infrastructural development  he started despite the  meager  resources  of the State.
Projects inspected by the former Vice-president and entourage includes Wauro-Jabbe roads, Gumti-Chalawa road, Kofare Jambutu road network linking Lake Geriyo,  Demsawo  street, and Karewa-Masakare extension.
Others are Yola bye pass, Damage roads in Yola Town, Ophanage home as well as Multi -Million Naira Yola International Hotel under renovation.