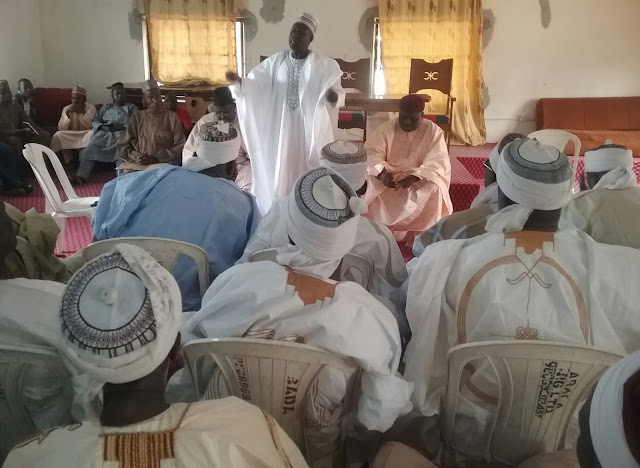 The Gang Wari Palace in the Ganye Emirate received the committee which was led by its chairman the Hon. Commissioner for Information, Comrade Ahmad l. Sajoh on  27th January, 2016.

The Adamawa State Commissioner for Information Comrade Ahmed Sajoh said they were in the palace to bring the message of social change agenda of Governor Muhammadu Jibrilla Bindow to the grassroot. The commissioner expresses the commitment of the present administration in transforming the state.

Comrade Ahmed Sajoh used the visit to commended the Ganye traditional council for ensuring peaceful coexistence among the people of the Chiefdom. He urged them to continue with the gesture.

The commissioner said the present administration is fully committed to bringing development to the people of the state. Stated that government will collaborate with the traditional rulers to provide a value added service loan to small scale productive business entrepreneurs in the state. He added that, sixty people will benefit from the thirty thousand naira no interest loan in each of the electoral ward in the state .
In discussing the present security challenges especially in the North East region of Nigeria, he reminded the traditional rulers about the security threats in the region by the insurgents, calling on them to be aware of the strange persons and objects in their localities.

Earlier on, the Gang Wari Ganye Alhaji Umaru Sanda who was on official assignment was represented by the Galadiman Ganye Alhaji Sulaiman Danaba welcomed all the idea of transforming the state to greater level economically.

Responding to the government gesture the District Heads of Mbulo Alhaji Umar Sanda and that of Gurumpawo Alhaji Ahmed Tukur Muhammed commended the Governor for having his people at heart. They said soft loan program will go along way in reducing poverty among the people of the state. The traditional rulers therefore called for synergy between the three tiers of government and the traditional institutions to move the state forward.

The head of service Ganye local government Alhaji Muhammed Buba Doletibe commended the Governor for the initiative.
In another interaction session with the religious, trade unions and organisation leaders in the area, the information commissioner task them to ensure unity and understanding among the faithful. Stated that without peace development cannot be achieve.
The religious leaders therefore called on the state government to revive the Nigeria Inter-Religion Council in the state. They said that that is the only avenue in which religion differences can be settled amicably. They however informed the committee that there is cordial relationship between the two religion in the Chiefdom and they will continue to sustain it.