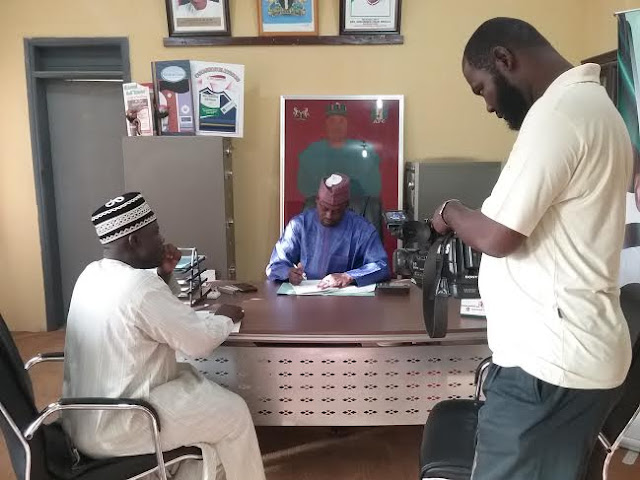 Hon. Commissioner Ministry of Finance and Budget Hon. Mamood S. Yunusa granted an interview to ATV Yola and Adamawa Daily Reports on his Outlook opinion on the 2016 Proposed Budget; he made this known at his office yesterday January 5th 2016.
Hon. Yunusa spoke extensively about the Budget, he said the Proposed Budget is a Budget for Change and that the Budget was designed to take care of the following priorities of the Government;  Security, development, hospitals referral centre, education as well as jobs for the unemployed.

Similarly, he said that a programme has already been designed in order to create wealth, manage wealth and maintain wealth. How ever, he lamented over  the present condition of our hospitals adding that the administration intends to rehabilitate the sector most especially by providing professional doctors as well as a referral hospitals for patients with serious health problems.

On the issue of roads and development, he said many roads have been constructed across the state Capital and more will be constructed and commissioned before the end of the first quarter of the year. He also said that the construction process will be extended to the rural areas adding that  over 14 roads are in progress within Mubi Metropolis.

The Honourable also spoke on the poor state of buildings and  structures in our schools, how hostile and unfavourable they have become for learning and teaching to both teachers and students stressing that the government has planned to invest more in education this year.

Agriculture according to him is one of the cardinal areas that the government will be investing in although the Budgetary allocation for it is a bit lower than other sectors. He said the government plan to do it in a different way i.e. by creating an enabling environment or an  investment friendly  environment for  investors to come into Adamawa State and invest more. Involving the private sector means that  the government intends to partner with them for better results this year. By so doing the farmers will come in, cultivate the land, plant and harvest , process the  produce and sell it. He said that that will improve our production capacity adding discussions are on in the Federal level to see how it can be achieved.

Similarly he said as a government, they want to significantly bring down the rate of poverty in the state and that can be achieved through job creation, wealth creation and wealth circulation. He said that it is for that reason that the government has set aside some funds to take care of that through the introduction of skills acquisition and development, and the government will support the youth that will graduate from their chosen profession such as  Carpentry, mechanic, etc. With a token for them to establish themselves.