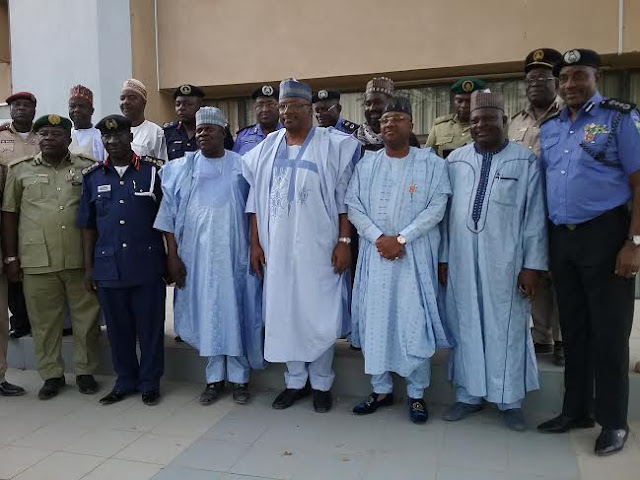 Security  Agencies has been  assured of  all the  necessary  support and cooperation  by the Adamawa state Government  for effective discharge of their responsibilities in the state.
Governor Muhammed Umar Jibrilla  who gave the assurance when the Honourable Minister of Internal Affairs  General  AbdurRahman  Dambazau retired  paid him a courtesy visit at Government House Yola.
The Governor  expressed  satisfaction with the  various  measures taken by the  security  agencies in  maintaining peace and  stability in Adamawa state. Governor Muhammed Umar Jibrilla  also thanked  the Inspector General of  Police  Solomon Arase  for putting  his eyes on Adamawa state  in terms of security  situation and also commended  other security  agents  for maintaining  peace and order in the state, and reiterated  his government  support and cooperation to the  security  outfits in the state. 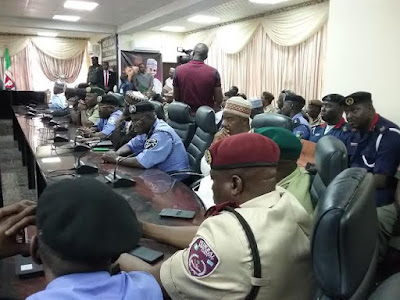 He, commended  President Muhammadu Buhari for his commitment  in the fight against insurgency  in the North East of the country.

Speaking  earlier, the Minister of Internal Affairs  General  AbdurRahman  Dambazau  retired  said  he was in Adamawa state  in continuation  of familirization tour  to North-East  sub region specifically  Adamawa,  Borno and Yobe states  and to deploy  the services of his men  into the  areas already secured  by the military  so that  the military  can move on to  other  critical  areas in the sub-region.
The Minister  explained that the  idea is to re-establish  civil authority  in those conflict areas that were earlier  taken over by the insurgents  but now have been secured by the military  after meeting the December date line target  given by President Muhammadu Buhari on the fight against insurgency.
He also  informed  Governor Muhammed Umar Jibrilla  that he was in Adamawa state to  have a  first hand experience  and assessment of the  security  situation  before  his ministry  carries out the  necessary deployment of  personnel, stressing that  already  some of the  personnel  are wot king along side  with the military into the second  part of the  comprehensive  and holistic efforts towards establishing  peace and security with in North -Eastern  part of the country.
General  Dambazau  also stated that "" winning the  peace  is as important as  winning the  war,now it is  time to  win the  peace  and to win the peace  we must re -establish  law and order  in those places  and be able to normalise live in those places,following  that we must be able to prepare an excellent  environment  into which those earlier  displaced  will be able to go back and live a normal live,he added. "" 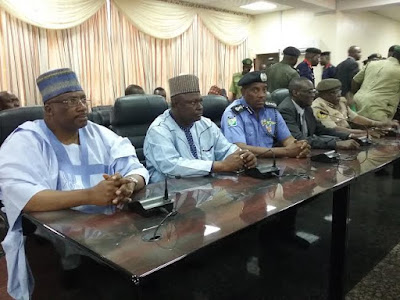 The minister  also appreciated Governor Muhammed Umar Jibrilla 's administration  for its efforts in assisting  his agencies in the state  specifically  the Police,Prisons, Civil Defence  and other  para -military organisations, assuring that  he will continue to support the  administration of governor Muhammed Umar Jibrilla  by ensuring that  there is  peace and security guaranteed  in Adamawa state  in order to  carryout  developmental  programmes to the  people of the state.
General Dambazau  and his entourage had earlier paid a courtesy visit  on the Lamido Adamawa His Royal Highness Dr Muhammadu Barkindo Aliyu Mustafa at his palace and also visited Yola prisons  as well as IDP camp at Malkohi.
07:38
Adamawa Daily Reports
News
Email ThisBlogThis!Share to TwitterShare to Facebook