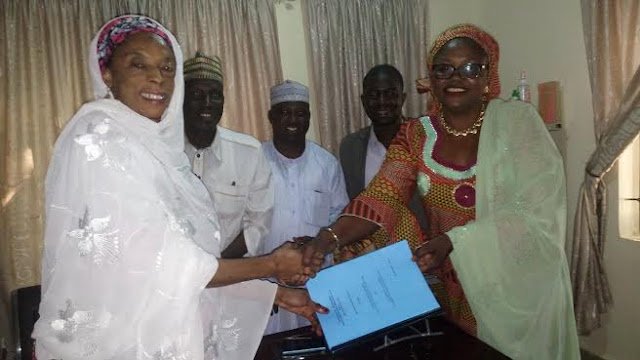 More so, Mrs. Kadzai  briefed her successor on the various activities of the Ministry and that of Adamawa Transport Company  which is the only parastatal under the Ministry. She concluded with a word of advice urging her successor to be prudent in her new Ministry because the Ministry is one of the Ministries that is known for generating revenue to the State Government.

On the other hand, the newly deployed Permanent Secretary Hajiya Jummai D. Tukur in her response thanked the outgoing Perm. Sect. for her wonderful reception and promised to continue from where she stopped so as to move the Ministry and the state forward. She had also urged the entire staff to be brothers and sisters, and to work in harmony with one another.

Finally, she solicited for the cooperation of the staff by extending the same kind of gesture they extended to her predecessor, in order to move the Ministry to greater height and that her doors are wide open to staff for advice and consultation at any time they deem it fit.
Conclusively, the handing over and taking over of office occurred respectively. They both signed the handing over note in the presence of the staff members.