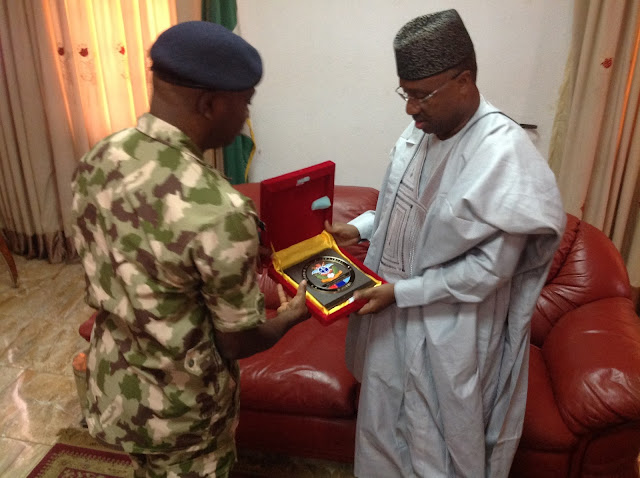 
Members of the Boko  Haram sects  who Voluntarily  surrendered  earlier  were currently engaged  under the "Special  Operation  Safe Corridor " with a view to  making  them  more useful  citizens  in the society.

The  Acting  Chief of  Military  Defence  Intelligence  Major General   S .J Davies who disclosed this  when he led  a delegation of  military personnel  on a courtesy visit to Governor Muhammed Umar Jibrilla.

The  Chief of  Defence intelligence had told Governor Muhammed Umar Jibrilla  that the  operation  was specifically  designed  by the  military  to take  care of the  Boko Haram  insurgents  who were voluntarily abandoned  from their  neferious  activities  and decided  to be more useful  to the society.

According to the cheif  of  Defence intelligence, already  about One Thousand Boko  Haram  militants  from Maiduguri  axist has retired  and are  being considered as "YAN GORA' or as members of the  civilian  joint  task  force (JTF) and  expressed  hope that  government will  support  the  Military  with the  necessary  facility  under the Operation  in Adamawa state  as it prepares to revive  any such member  which intend to  retire.

He also called  for the support of the civilian  JTF  as they  partner with the  military for the  maintenance of  peace  in the state, and urged the Governor  to  do everything possible to  offer the  necessary  assistance in that direction.
Major General  S. J. Davies  later presented a sovenier  to Governor Muhammed Umar Jibrilla.

While responding Governor Muhammed Umar Jibrilla  commended the Military  for their  timely intervention  emergency  situations  so as to ensure  peace  has prevail  in the country.

The Governor however assured that  his government will continue to  give all the necessary support and cooperation to the Military.
11:59
Adamawa Daily Reports
News
Email ThisBlogThis!Share to TwitterShare to Facebook