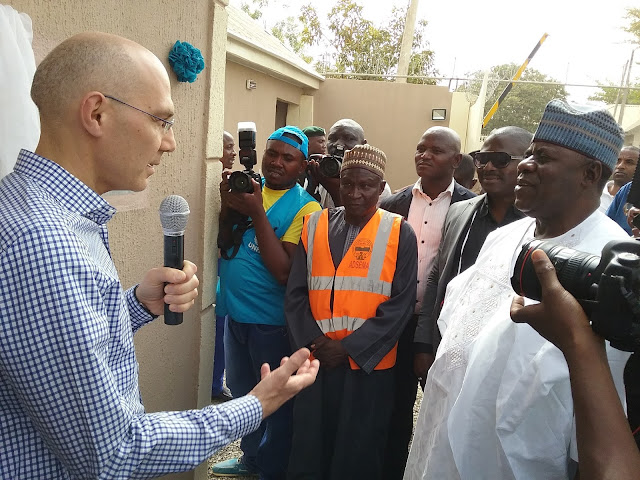 
The  problems  being faced by the  Internally Displaced Persons  (IDP's ) in Adamawa State  would  soon be  addressed.

The Assistant  High Commissioner  (protection ) of the United Nations  High Commission for  Refugees (UNHCR ) Headquarters  in Geneva  Mr. VOLKER TURK  who led a delegation from the UNHCR  disclosed this during their visit to Adamawa state in continuation of a familirization tour  to states affected by insurgency in Nigeria.

Mr.Volker Turk  stated that  the  delegation  was in Adamawa state to  partner and  interact with the  Internally  Displaced persons, NGO's  and the authorities  concerned about the  plight of the  victims of the insurgency as well as to  have a discussion with the  host communities  in order to bring  soccour  and  peace  to the victims of insurgency in the North East of Nigeria.

He  pointed out that the  UNHCR 's primary  responsibility  is to  re-connect the  IDP'S  with their communities  and  to rebuild  their lives by providing  humanitarian assistance by the  commission.
The delegation also  paid  a courtesy call on the  Deputy Governor Engr.Martins Babale  at Government House Yola  where the  Deputy governor  called  on the  International  Donor agencies to come to the aids of the Internally Displaced persons in the state  by providing  them with the necessary  basic facilities at the  campsite the state.
He Lamented  that the  Donor agencies  have promised  to  build  about Five Hundred  Houses for the Victims of insurgency in the Adamawa state  to alleviate  their hardship  as well as to  reconnect  them with  the  rest of the society.

The  Deputy Governor Engr.Martins Babale  accompanied by UNHCR delegation  commissioned  Yola Office  located at Along Army Barracks  Road.
The  delegation also  visited  Malkohi  informal IDP  settlement  where the  officials interact with the Internally Displaced persons  in order to  have  first  hand information on the  condition of the IDP'S  at the  Camp so as to  provide  assistance and relief to the victims of the insurgency in the state.